You are here: Home » News » Poaching tragedy in the Chyulus 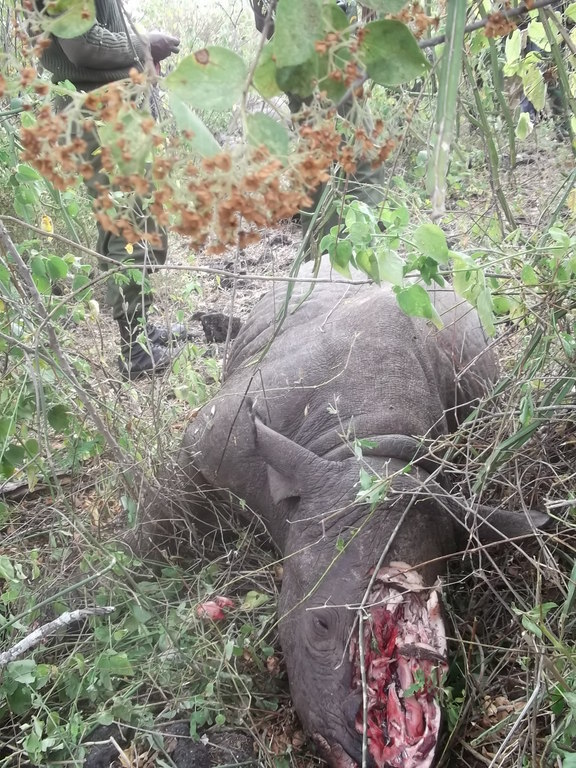 We are shocked and saddened to hear of the recent poaching incident in the Chyulu Hills in Kenya in which a critically endangered female black rhino and her calf were shot dead and dehorned. Below Richard Bonham, Director of Operations Big Life, recalls the horrifying incident.

Last week the sound of gunfire was heard by Big Life and Kenyan Wildlife Service (KWS) rangers at Mukururu in the Chyulu Hills. About 15 shots just before dusk. The rangers reaction was instant and efficient, they set up cut off point and ambushes which led to a contact with the poachers which resulted in an exchange of fire, but no casualties on either side.

The next morning I watched as KWS mounted a text book operation with aircraft and reinforcements moving in at first light. We all knew it would not be good news and by 7 o’clock two carcases had been spotted by the KWS aircraft. We went in on the ground and found a mother and her calf lying dead, faces hacked away and surrounded by empty AK 47 cartridge cases.

As I looked at the at the already putrefying bodies I remembered the elation when we we first picked up the tracks of this very same calf just after he was born, about two years ago. I also remembered looking at pictures from a camera trap, taken not long ago which showed the mother was showing signs of pregnancy. Truly high points in my conservation career. Now, after all our efforts in trying to make them safe I was overtaken by an overwhelming sense of sadness and failure, not only for the rhino but also for all of you that have done so much to help us try and protect them

I am told that a Rhino is being killed on average every 11 hours somewhere in Africa, a rate that is taking them to certain extinction. We cant let that happen and as one of the rangers said its time to ”kasa moyo”…. [Strengthen resolve] and keep going.

2 thoughts on “Poaching tragedy in the Chyulus”