You are here: Home » News » Going, going… off? Defra’s If They’re Gone campaign 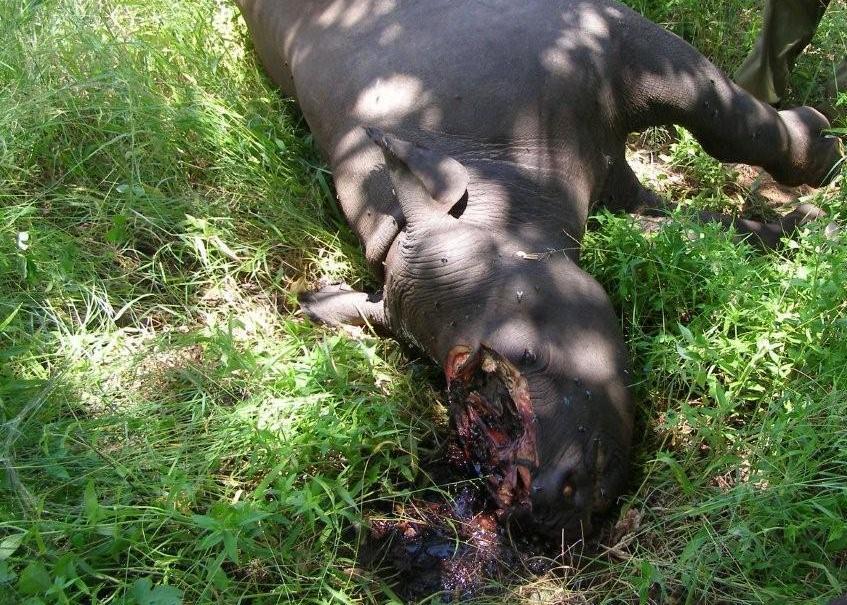 Defra’s If They’re Gone campaign aims “to raise public awareness about the plight of rhinos, tigers, elephants and orangutans, give guidance and inspire individuals to take action to help reduce the threat to endangered species”. The problem is that, for the rhinos at least, its aim is off.

The campaign literature implores us, the UK public, to “Think before you buy; turn your back on products containing unsustainable palm oil and rhino horn”. It’s true: there are palm oil plantations in Sabah, on the island of Borneo, that have encroached upon wildlife habitat. Sabah now has as few as three, or perhaps a maximum of 15 Sumatran rhinos left; and habitat destruction has contributed to the dramatic decline of this subspecies.

But by far the largest problem is the current poaching crisis, caused by demand for rhino horn. Research shows that rhino horn is being sent to Vietnam, China and other East Asian countries. Are these consumers going to visit Defra’s website or the campaign’s Facebook page? Will their attitudes and behaviour change as a result? UK law does not allow animal or mineral products to be used in unlicensed medicines sold in the UK, and the vast majority of herbal medicines come into this category. It’s not as if the UK public has been drinking concoctions of rhino horn and rice wine to stave off hangovers or to demonstrate our superior social status. So why focus the Defra campaign on the UK public?

What rhino conservation programmes really need is twofold: financial support; and political pressure on key countries to tackle rhino horn trafficking and consumption. The press release issued on 26 February 2013 by the IUCN could not have been clearer: “IUCN experts call upon the international community – especially the key consumer and transit states such as Vietnam, China and Mozambique – to urgently address the crisis by strengthening and enforcing regional and international trade laws, particularly in relation to rhino horn.”

We asked the campaign committee at Defra about these two actions: asking the public to donate to rhino conservation charities; and asking them to lobby their MP to take action at intergovernmental level. The reply to both was that, as part of the government, Defra couldn’t do so.

We therefore withdrew from the campaign: we need to spend our time and efforts on measures that will target the problems more directly.

In the latest version we’ve seen, the campaign document does suggest that the public can “Support your chosen charity or local zoo’s / safari park’s conservation programmes”; whether this comes through in its messaging remains to be seen. The campaign document also says that “The UK is working with both range and consumer states on enforcement and educational measures.” There’s no further detail on this, and no mention of Mozambique or Vietnam or China being placed under scrutiny.

Defra has helped tackle rhino poaching and has supported rhino conservation: through the Darwin Initiative, through funding of the IUCN SSC African Rhino Specialist Group, and by introducing an export ban for rhino horn trophies and carvings from the UK, which has been taken up elsewhere in Europe. These measures were worthwhile.

But If They’re Gone’s message is off track: the wrong focus, the wrong audience and the wrong call to action. Going, going, gone off at a tangent.

For another comment on the lack of joined-up thinking, please see this comment by Helen Buckland of the Sumatran Orangutan Society on DECC proposals for biofuels, which would threaten precisely the same forests that elephants, rhinos, tigers and orangutans – the species targeted by If They’re Gone – depend on.)