You are here: Home » News » Rhinos return to Samburu 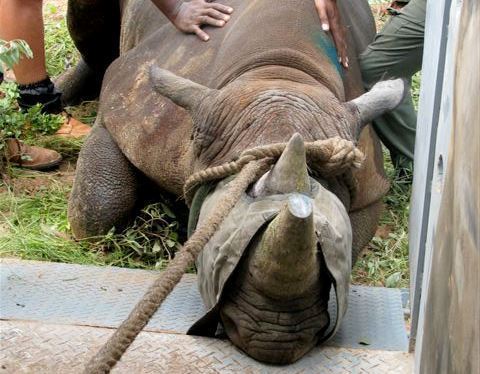 On Monday 18 May, the Kenya Wildlife Service (KWS), Northern Rangelands Trust (NRT) and Lewa Conservancy embarked on a relocation programme in a bid to expand black rhino habitat in Kenya.

After intensive planning, 20 rhinos were preselected to be moved from Lewa, Nakuru and Nairobi National Parks to a sanctuary within the community owned and operated Sera Community Conservancy. The project is the first time in East Africa that a local community will be responsible for the protection and management of the critically endangered black rhino.

The translocations were being done in stages due to the logistics involved. More than half of the rhinos had been moved when a tragic turn of events meant KWS had to put the translocations on hold due to the death of three rhinos (not due to poaching).

On Monday 25th May the post-translocation monitoring teams reported the death of two rhinos that had been captured from Lewa and released in Sera Conservancy. A veterinary post-mortem revealed the two animals succumbed to complications arising from impaction of the lower gut. The third rhino experienced complications with the anaesthetic during capture, and died despite all efforts to resuscitate it.

The teams involved did everything they could to ensure the health and safety of the translocated rhinos, but complications can and do arise with ambitious projects such as relocations. The 11 remaining rhino are being intensively monitored 24/7 by a joint team of KWS vets, Lewa and Sera Community Conservancy scouts, with aircraft support.

The long-term goal remains to re-establish a viable population of rhinos in Sera Conservancy. As well as providing an increased habitat area for the black rhino, the re-introduction of the species is expected to provide a significant boost to tourism in the area and provide job opportunities for local communities.

Numbers of Eastern black rhino plummeted by around 98% between 1960 and 1995 primarily as a result of poaching and hunting. The population is slowly recovering, but lack of available habitat and poaching remain serious threats. Ambitious translocation projects and community conservation programmes such as the rhino return to Samburu are key to the species’ recovery.