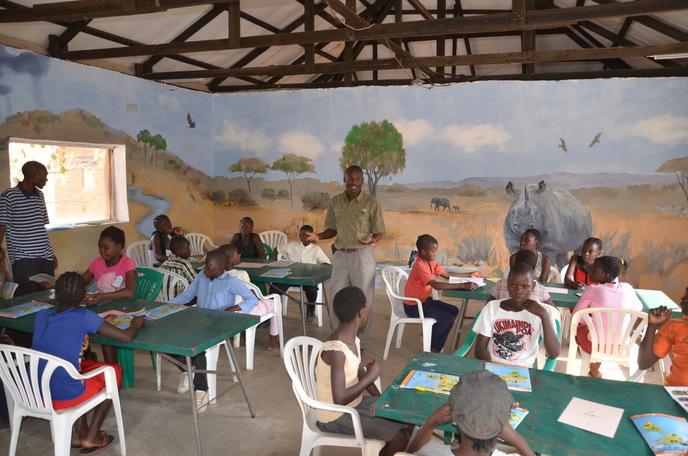 Zambian Education Officer, Sylvester Kampamba, has won a coveted Disney Conservation Hero Award in recognition of his achievements teaching Zambian school children to protect rhinos. Sylvester teaches children about rhinos in a region which previously lost all its native rhinos to poachers but now sees its reintroduced rhino population grow.

Lolesha Luangwa, meaning “Look after Luangwa” is a pioneering conservation education programme fast becoming a blueprint for youth engagement with conservation across Africa. Run by Frankfurt Zoological Society’s North Luangwa Conservation Programme (NLCP), each year, 1,400 pupils from 21 schools based around North Luangwa National Park’s boundaries are taught about rhinos and the importance of conservation. Lessons in the classroom and exposure visits via a three-day safari into the Park, where many see rhinos, elephants and other wildlife for the first time, enable them to learn about the benefits conservation brings. Sylvester teaches children aged 11-14, specifically targeted as they are old enough to both understand conservation messages and to actively pass them on to their family and community; creating a ripple effect of ownership and responsibility for the region’s natural resources.

In the 1970s and 80s Zambia’s entire rhino population was poached; rhinos were officially declared extinct in 1998 after more than a decade without recorded sightings. Rhinos were reintroduced to Zambia in North Luangwa National Park by the NLCP between 2003 and 2010. Animals were translocated from South Africa in what was then the biggest undertaking of its kind. Since the associated education programme began, the population has continued to grow and no rhinos have been poached in the region; bucking continental trends. (Across Africa, over 6,000 rhinos have been poached for their horns since the current poaching crisis began in 2006.)

Sylvester first came to work for the North Luangwa Conservation Project in 1997 as a casual labourer in preparation for the rhinos’ arrival. It soon became apparent he had a natural affinity with children and that conservation was his passion. “Without Sylvester there wouldn’t be an education programme” explains Claire Lewis, Technical Advisor to NLCP. “He is from the area and speaks the language, and he remembered what inspired him when he was a kid still at school and so has been instrumental to our success. When the children come to visit, they see all the employment opportunities conservationists can bring. They can become rangers, or mechanics, or work in education. He’s a real role model to them and this award is so well-deserved.”

Save the Rhino International has funded Lolesha Luangwa since 2006 and put Sylvester forward for the 2017 Disney Conservation Hero awards. Save the Rhino Director’s  Cathy Dean says: “It’s hard to think of a more inspiring and engaging individual, who has made spreading the message about the importance of conserving black rhinos among the local community his personal mission, and who does so with such effectiveness and enthusiasm.”