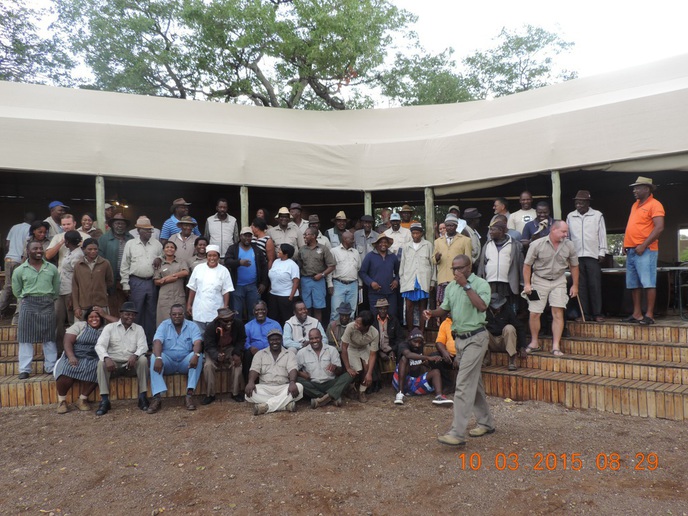 When SRT was started in the 1980s a ‘Traditional Authorities Engagement Programme’ was initiated by the late Blythe Loutit of SRT and the now retired Garth Owen-Smith of IRDNC, with the aim of closely engaging with local headmen and their councillors to combat rhino poaching.

Over time the bond deteriorated and the Traditional Authorities were no longer consulted or approached for advice or assistance. With the current poaching crisis SRT has re-visited the strategy that was used during the early 1980s when rhino poaching was rampant in the area. SRT realised that over the years the communication gap had grown between SRT and the Traditional Authorities, meaning a vital link was missing with the individuals holding the strongest powers in their region over local communities.

To rebuild and strengthen the relationship between SRT and the Traditional Authorities, a road tour took place from 8-12 March 2015 with SRT field staff including CEO Simson Uri-Khob and 27 headmen, chiefs and councillors. Over the five day trip, the group experienced a range of activities including talks, tours of key rhino areas and discussions on how to tackle the rhino poaching crisis. SRT informed all delegates of the urgent importance of having their help in implementing their rights as Traditional Authorities to evict illegal settlers on their lands, which represent key rhino habitats.

The road trip was very successful for SRT to re-connect with the Traditional Authorities and provided a real eye-opener for all those involved in realising just how critical the rhino poaching crisis is at present. The headmen, chiefs and councillors realised the importance of their intervention in tackling the growing problem of illegal poaching on their lands and the monitoring of human movement.

Save the Rhino International provided £800 towards the costs of this important trip and remains a long-term supporter of the important work carried out by Save the Rhino Trust, Namibia.

Donate to support Save the Rhino Trust

One thought on “Local communities key for Namibian rhino conservation”