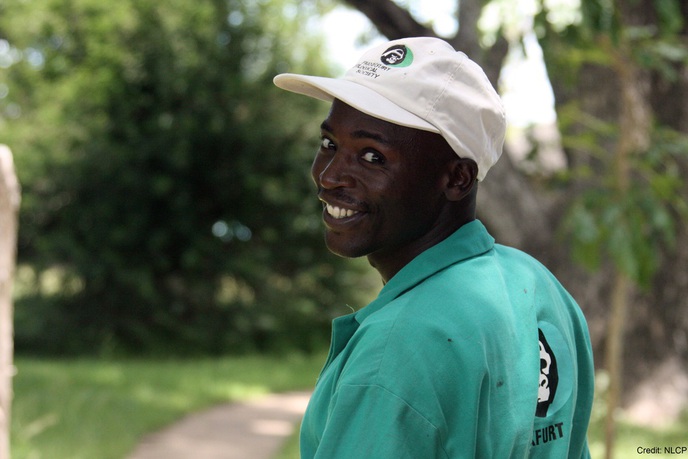 Sylvester Kampamba had a huge surprise last week when an invitation landed on his desk at the Lolesha Luangwa Conservation Programme’s headquarters in Zambia. His colleagues were thrilled to read that he was nominated for a Rhino Conservation Award; an annual accolade celebrating the individuals working to save African rhinos from extinction. Sylvester’s presence was requested at the prestigious ceremony in Johannesburg, where he would find out if his nomination was successful…

The region is part of Africa’s famous Great Rift Valley and home to all “Big Five” species: elephant, buffalo, lion, leopard and rhino. Cookson’s wildebeest, Crawshay’s zebra and the continent’s greatest concentration of hippo also make their home in the Park.  Sylvester’s role as Education Officer takes his work to over 20 local schools, and thousands of pupils who live in surrounding areas. Despite living in close proximity to the region’s black rhino population, many children have never seen a rhino first hand and their families may not know about the wider community benefit of living alongside the species. By learning about rhinos, seeing them up close, and hearing about the cost to their community from illegal poaching, Sylvester is inspiring a generation of young Zambians to protect their natural heritage.

Growing up in north Luangwa, Sylvester’s dream was to become a school teacher but, like many young people in Zambia, his formal education was cut short. In 1997 he joined North Luangwa Conservation Programme working as a part time labourer. Immediately, his caring nature and easy rapport with children stood out. At that time, the region’s black rhino population had been wiped out by the poaching crisis of the 70s and 80s but, in the early 2000s, the Park began a new initiative to reintroduce the species.  Black rhinos were translocated to the Park and the new arrivals moved to temporary pens called “bomas”, as they acclimatised to their new surroundings.

From the very beginning, it was clear that for the rhinos to thrive community support was needed, and the earlier on local people could learn about the benefits of wild rhinos, the better. The team started arranging for groups of school children to visit the bomas and see – often for the first time – real, wild rhinos. When it came to finding someone who could convey conservation messages and inspire young people, Sylvester was the natural candidate.

Today, Sylvester’s role takes him into local classrooms to help teach conservation as part of the school curriculum. Students learn about the history of black rhinos, the threats to their survival as a species and why the reintroduction programme brings benefits to the whole community. Every year the children take part in a fun Conservation Celebration Day, learning through games, songs and having lots of fun!  As one of the song’s lyrics says: “All Zambians let’s come together and conserve our wildlife especially black rhinos because they bring development to this country Zambia.”

Sylvester’s role goes beyond teaching children. His work takes him to meet teachers, community elders and local wildlife enforcement officers. This has helped the entire local community feel more connected to Lolesha Luangwa’s conservation work, and directly feel the benefits of protecting natural habitats and their biodiversity. This year, no black rhinos have been poached, a testament to the success of the programme.

Sylvester has a huge impact on local children, but his role at Lolesha Luangwa has also changed his life, too. After becoming an Education Officer, Sylvester decided to go back to school as an adult learner to fulfil his dream of finishing his education. For the next five years he passed his Grade 10, 11 and 12 exams while working full time, including working trips away from home for weeks at a time.  Passing his Grade 12 exam means that Sylvester now has all the qualifications he needs to become a school teacher but he has chosen to use his growing skills by staying at Lolesha Luangwa to teach conservation.

On the 11th of July, suited and booted, Sylvester boarded the plane to South Africa. All his colleagues in Zambia, and the team at Rhino HQ in London, crossed our fingers in anticipation. The nominations were announced. Sylvester came third place for Best Education, Awareness and Fundraising, and took to the stage to receive his award.