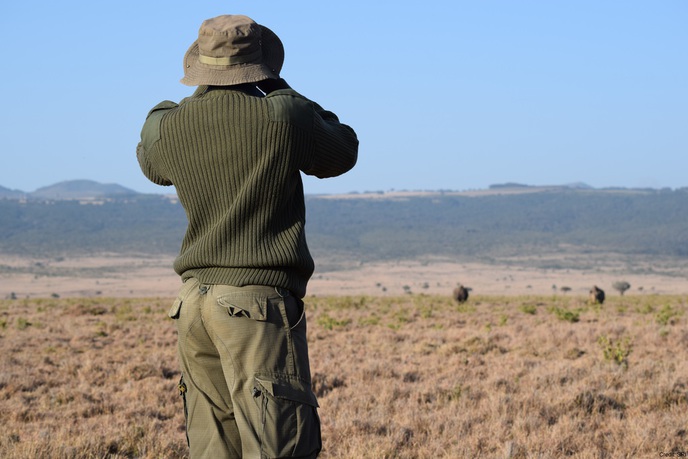 This Sunday is World Ranger Day, 2016. Held each year on 31 July and observed across the globe, it is a time when we commemorate those rangers killed or injured in the line of duty, and celebrate the work of their peers who, often at great personal risk, safeguard our natural heritage for generations to come.

2016 marks the 10th World Ranger Day since founded in 2007 by the International Ranger Federation. Back then, we were one year into a new poaching crisis. 2006 proved watershed year for rhino populations worldwide, as soaring demand from South East Asia saw poaching rates return with a vengeance to pre-1990s levels, and continue to escalate even further. In 2016, the numbers of rhinos poached annually continues to peak. For the first time, the number of rhinos lost to the illegal horn trade threatens to outrun the number of births each year. Population specialists, conservationists on the ground and rhino enthusiasts are left with a bleak picture. If the current rate of poaching continues unabated, rhinos could face extinction within the decade.

Against this backdrop, the role of the ranger has changed dramatically, too. Anti-poaching units are increasingly militarised as they come up against well-armed, highly trained crime syndicates working across vast landscapes – often under the cover of darkness. As rhino populations decline the stakes become even higher. Rangers can expect to engage in hand-to-hand combat; some on a shoot-to-kill basis. Many observers have called it a “poaching war”, but physical danger is not the only pressure faced by rangers. They may be approached and offered bribes to reveal information to poachers, often by members of their own community. Working long hours and travelling away from home for weeks at a time can put strain on their home life, and when out on a mission, the conditions can be physically gruelling.

Much noise has been made about new technologies, with drones, cameras in horns and horn poison receiving a lot of press attention. Yet the most effective method to protect rhinos is perhaps the most simple: well-trained, well-equipped rangers with high morale. In other words, nothing beats trusted boots on the ground.

At Save the Rhino we are big fans of getting the basics right, and that’s why we are particularly keen to fund the slightly less exciting things – the tried and tested items which make the biggest difference for our rangers. If a ranger is willing to give his life to protect a rhino, the least we can do is make sure he has proper boots for tough terrain, the right supplies when camping far from home, and a hot shower when he returns back to the station at the end of a long day.

Help from our supporters has meant that that rangers receive the best quality training across the conservancies we work with in Kenya, so no one feels at a disadvantage, and – in case they are injured or killed in the line of duty – their families are cared for through a hardship fund.

We have helped supply rangers across Africa with new shower and toilet blocks, first aid kits and special food packs for long trips away. Equipment like binoculars, boots, jackets and radios makes a huge difference to their success in the field. When returning to base camp, new solar systems mean they have lighting at night-time and can charge their phones to keep in touch with their loved ones until they get back home.

In the gallery above are photos from SRI Deputy Director Susie Offord’s recent trip to Kenya, where she met the incredible rangers at Lewa, Borana and Ol Jogi Conservancies. We are particularly delighted to see their beaming smiles as they model some new kit funded by SRI’s supporters.

To all rangers and their families, including those who lost their lives this year, a heartfelt thank you.