You are here: Home » News » Riding for rhinos: Two young men raise over £22,000 for rhinos cycling across the world 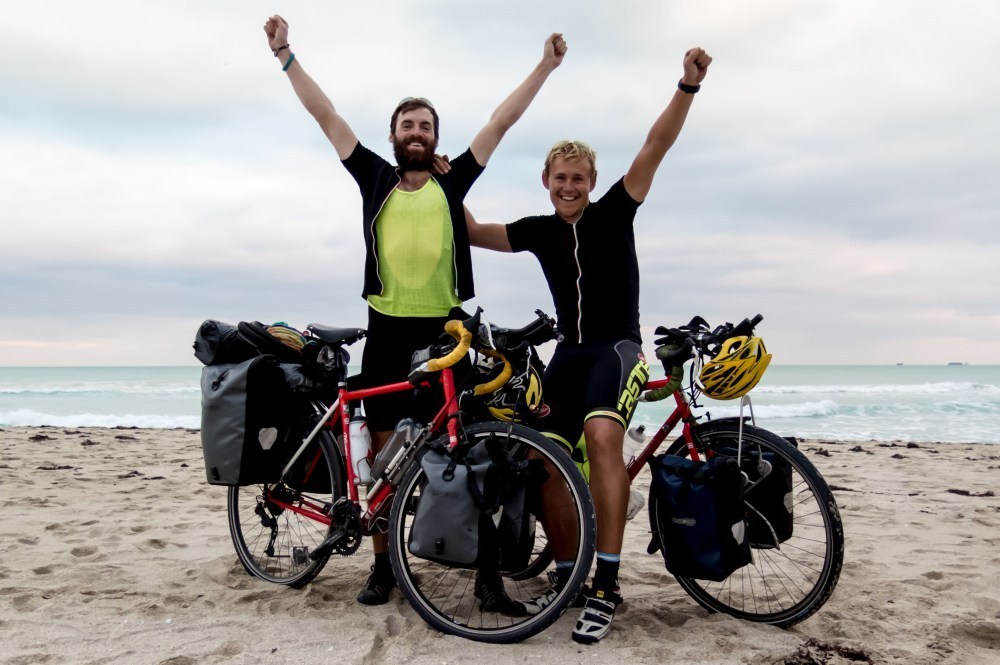 On  April 20 2014 two friends, Will Frazer and Johan du Plessis, took on the challenge of a lifetime.

Their adventure: Ride across the world in aid of Save the Rhino International.

As they pushed off surrounded by family and friends in Trafalgar Square and the heavens opened, they had no idea what was in store for them, or just how successful they would be.

234 days later, their challenge is complete. They managed to navigate their way across some of the world’s most notoriously treacherous terrain, from London to Miami via Eastern Europe, Azerbaijan and Uzbekistan, across China, through South Korea and Japan, finally reaching the United States, where they trekked from West Coast to East Coast arriving on Thursday 10 December 2014 in Miami. The boys had many tests of character to overcome along the way, from cycling in 40+ degrees heat, to sleeping in drainage pipes and scavenging for food, to rescuing their bikes from being immobilized by mud and concrete in a desert quagmire, and all of it in aid of Save the Rhino.

“The response to our appeal for Save The Rhino International has been humbling. We’ve raised over £22,000 and awareness amongst our friends and family of an issue that few were aware was happening.” – Will Frazer

Rhinos have been around for over 40 million years, but the species currently face extinction. Across the globe, rhino poaching for their horns has dramatically increased and is the biggest threat to the rhino’s survival. This poaching is driven by the demand for rhino horn in Asian countries, where it is used as a status symbol by wealthy individuals and in traditional medicine.

The trafficking of wildlife products, including of rhino horn, has become more organised, more lucrative and more dangerous than ever before, yet many governments are still not doing enough to combat it. Rhino poaching is now being controlled by international criminal gangs and should be considered a serious threat. Currently three rhinos are being poached each day in South Africa alone, at this rate rhinos could be effectively extinct in the wild by 2026.

“In China we got a glimpse into the complexity of the challenge to reduce demand for rhino horn in the far east. The language barrier meant it often hard for us to get food and water let alone communicate something as sophisticated as why rhino horn had no medicinal qualities and how buying it was bringing a species to its knees on the other side of the world.” – Johan du Plassis

Find out more about Will and Johan’s trip here.