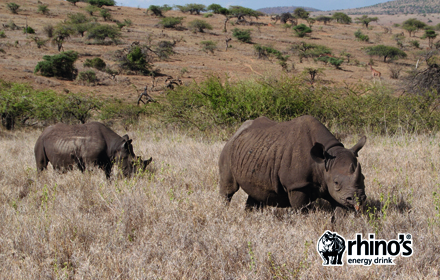 Save the Rhino are delighted to announce a new corporate partnership with rhino‘s energy GmbH, a global beverage supplier based in Munich, Germany.

rhino’s energy GmbH will be giving long term financial support to Save the Rhino’s programmes as well as raising awareness for Save the Rhino and rhino conservation by advertising Save the Rhino on it’s drink cans.

rhino’s energy GmbH will begin by donating a percentage of it’s profits from the first quarter of 2013 to the Chyulu Hills Game Scout and Rhino Programme, based in Kenya north of Tsavo West National Park. The programme works to protect the critically endangered Eastern black rhino. About 80% of the Chyulus’ black rhinos’ home range is inside the Chyulu Hills National Park, and the other 20% outside the park on community land. The total rhino area is 1,195km².

The long-term goal of this programme is to provide enhanced security for the rhinos and other wildlife in the Chyulu Hills National Park and the surrounding habitat. Ongoing work includes continuing monitoring patrols within the Chyulu Hills National Park and in the adjacent Mbirikani Group Ranch, providing an effective anti-poaching and intelligence-gathering operation and prosecuting illegal activities, in the context of the current rhino poaching crisis. A key goal is to designate the northern end of the Chyulu Hills as an IPZ (Intensive Protection Zone), with increased manpower, a new waterhole and a fence on the eastern boundary, to allow the translocation of more black rhino into the park, bringing this important rhino population up to viable breeding levels.

Following the launch of the collaboration Marco Zielinski, CEO of rhino‘s energy GmbH said
“It is an obligation to use the power and the strengths of rhino’s energy drink and SRI to fight against the decrease of the rhino population. A global donation appeal, realized from a strong brand in cooperation with a professional organization, will generate mentionable funds to SAVE THE RHINO animals worldwide’

Click here to find out more about rhino’s energy GmbH

One thought on “rhino’s energy GmbH”