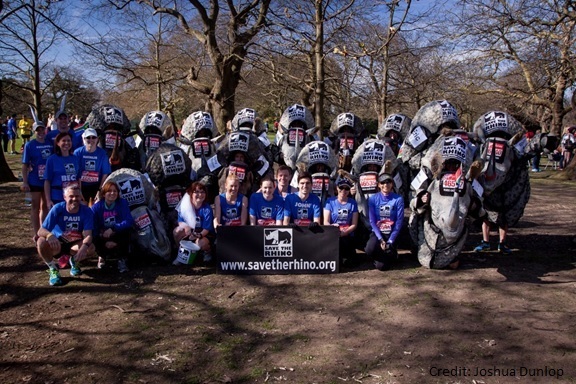 It’s more than 10 days since the marathon but I still don’t think I’ve recovered from the day. The problem is, I’m not sure whether I need to recover from the exhaustion (and just to be clear, I did NOT run) or the sheer *awesomeness* of it all. Maybe both…

The London marathon is Save the Rhino’s largest fundraiser every year.  So, quite rightly, it gets the most amount of love and attention. Preparations began months in advance – well before I joined in March.

This year we (yes, I am now fully integrated into the ways of SRI) signed up 55 runners, 15 of whom would run in those famous costumes I mentioned in a previous blog. As if doing the 26 miles in shorts and a t-shirt isn’t challenging enough!

By the time I get to our designated meeting point at noon on Sunday, the team had already done a full day’s work: wake up (at 5am), pick up truck, drive to office, pack up costumes and supplies for the day, drive to Greenwich, get runners ready – including last minute costume malfunctions – calm nerves, cheer them off, tweet picture, back to boss’s house for breakfast, prepare sandwiches for runners and team (you cannot get fresher than that Pret-a-Manger!), drive to meeting point… phew. Midday.

The arrival of the truck sends us all – volunteers for the afternoon, a.k.a. friends roped in by the team – into a frenzy of busy-ness, unloading food, drinks, chairs, gazebo, rugs, signs and then ferrying them down to the SRI section of St James Park. Topped with volunteer masseurs from Birmingham College we’d managed to create a little haven for the runners.  And not too soon either – the first runner was already in, in a breezy 2 hours 54 minutes! There was just about enough time for hugs all round, a quick drink, pictures, short video interviews and a massage before the next few poured in too.

The rest of the afternoon after that was a blur of high-fives, hugs (sweaty or not), cheering, Facebook updates, massages and food. Even with a couple of injuries, all the preparation over the last 9-10 months by the runners and the SRI team was paying off.

The first rhino-costumed runner came in at 4 hours and 59 minutes which seemed to trigger the remaining rhinos to come in a few minutes apart from then on. One of my favourite moments from the day was guiding a rhino costume runner through the crowds to the SRI area yelling, “Excuse me please, Rhino coming through!” I mean how often can you do that in a London park? How often can you do that EVER? Priceless.

Having hugged and comforted the last runner in – the only female rhino costume runner and the youngest of the whole group, the day ended with a roundup of all the equipment and leftovers of food and drinks, a ferry back to the same meeting point as earlier, loading the truck, a quick group picture and hugs all around.

Although that marked the end of my day, some of the team went back to the office, unloaded all of it before finally making their journeys home.

So here’s the thing. My last blog mentioned being star struck at all the celebrity presence in and around Save the Rhino. But after the London Marathon I think the true heroes for Save the Rhino are the marathon runners, costumed or non-costumed. It is they who put Save the Rhino on the map every year and they who allow us to continue our work, protecting our beloved rhinos around the world. Therefore, it is they who deserve all the respect and fame that they can get.

Finally, I cannot emphasise enough the pride I feel at being a part of the SRI team after a day like that. The amount of enthusiasm, effort and determination that emanates from each and every one of them (and I really mean each and every one, regardless of what position they hold in the office hierarchy) is completely contagious. After all how many people do you know who would give up a Sunday to hug sweaty people, smiling through a 20 hour day, overcome any obstacle you put in front of them and most of all, come back into work on Monday to keep going? The word ‘trooper’ keeps coming to mind but even that doesn’t do them justice.

You can also see our media coverage and Thank yous to 2013’s runners here and the amazing video from 2013. If this has inspired you, why not sign up to run in 2014 here.