You are here: Home » News » Parading at the Lord Mayors show 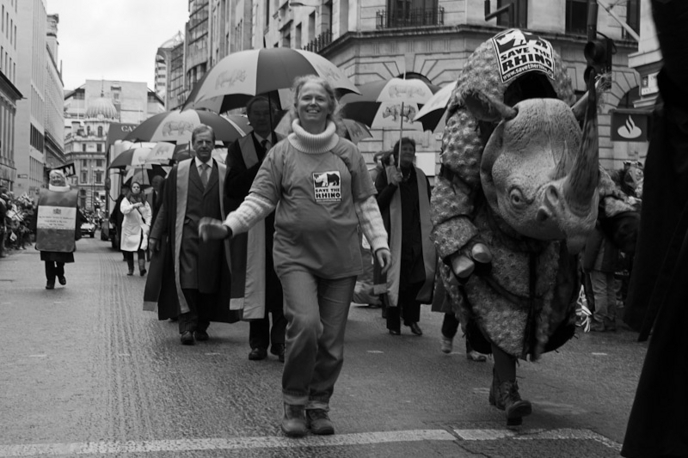 Save the Rhino was thrilled to be invited along to join the Lord Mayor’s show with the Worshipful Society of Apothecaries. The show is renowned as the ‘oldest, longest, grandest and most popular civic procession in the world’, and traces back to nearly 800 years of tradition.

From the flotilla to floats, Save the Rhino joined an assortment of organisations, including marching bands and vintage cars. We processed with the Society of Apothecaries, which are compiled of pharmacists, dentists and veterinary surgeons, and work to progress medical research and knowledge. Rhinos represent the logo of the Society of Apothecaries, and were on clear display to crowds as Society members held up their umbrellas (see the photo below).

Starting from Mansion House in the City of London, Save the Rhino joined the amazing parade of people walking for three miles towards the Royal Courts of Justice to inaugurate the newest Lord Mayor of London. This year, on Saturday 10 November, Alderman Roger Gifford was elected as the 685thLord Mayor of London.

The show was a great success, with an estimated half a million people coming to watch the spectacle. It was wonderful to receive so much support for Save the Rhino, as the crowds cheered our costume. If you fancy feeling famous, why not run in the London Marathon in April 2013 in one of our rhino costumes? For more information and to apply for the marathon, click here. To find out how to get involved in more fun Save the Rhino events, click here.