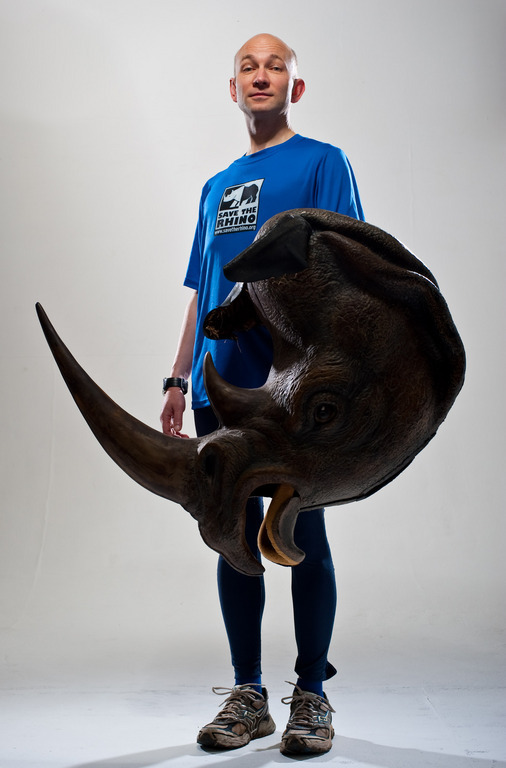 By Kenneth Donaldson, Patron, Save the Rhino

Photo above – Kenneth in training for the Comrades Marathon, 2010

The Cut seems something of a throwback to me. Close to unfashionable Waterloo, it has two prestigious theatres and an assortment of shops and cafes remarkable for the absence of chains. Amongst all these one-offs is a wonderful, old-fashioned camping store – a proper Aladdin’s Cave – jammed to the rafters, you need to fight your way past mountains of khaki kit to reach its gloomy interior. It was there I headed the day before the race. I had checked the forecast and all was not well with the world, or the segment I was to run through. Rain, rain and more rain. I hate running in rain. I freeze, become miserable, lose energy, get demotivated and depressed. You get the picture. Running in a waterproof is not really recommended – keeps water out, but sweat and heat in. Boil-in-a-bag type concept. But if I was to be out for 12 plus hours, I was damned if I was going to freeze all the way.

Saturday, 4am, I awoke to light rain. I Boris-biked to Waterloo in middling rain. I walked from Richmond Station to the Deer Park in persistent rain. At 6:20, having eaten my body weight in Jaffa Cakes, I assembled in the rain, and stood watching 299 other runners jumping up and down at the behest of a crazed fitness instructor. Did these guys really have that much energy to spare? We were about to run 100kms. That’s a mere 5kms shy of 2½ marathons. Cross country. Through seas of mud. Through the North and South Downs. Up (whisper it) Ditchling Beacon. Was I going to do star jumps? Was I *!?*.

We set off along the Thames (about 3/10 on the rainometer) and the first 10kms passed by easily enough. Nice and flat. A gentle 1 hour in. I was doing sums to pass the time. At this rate, I would finish in 10 hours, and thereby beat the course record by 19 minutes. Way-hey.

Our first hill. Despite still feeling good (if wet) I forced myself to walk. I was duly overtaken by many, and felt waves of misdirected pity heading my way. (Poor old fella, feeling it already, probably boiling in his bag the sad old sausage.) At the top of the hill I ran again.

And so it went on. We weaved down side-lines, across fields, around woods, through woods. The rain got harder and harder. It slackened off, and came back. The mud. Oh my word, the mud. Well over ankle deep and no way round; nothing for it – in you go. Worst of all were the muddy steep downhills, with severe danger of going splat and turning an ankle. You desperately want to run the downhills to make time, so feel pure rage when prevented because the organisers have put you down a 1-in-3 mud chute. 20kms. 2 hours. Still good.

I kept doing sums. 21kms is a half marathon (drizzly). 33kms and a nice third down (blustery). 42kms, the full marathon (showery without the intervals). 50kms, halfway and still happy to re-start running at the top of every hill (squally). All of the people who’d run those first hills were now long behind me. Running hills is such a natural part of training, but it’s so energy-sapping that you really do go faster if you walk. Bet they’re walking ‘em now, tee hee. Slog on. 63kms – a marathon and a half (stair-rods). 66kms. Two-thirds down. (Rain now biblical complete with thunder and everything.)

I was now totally on my own. No one in sight. Just the pink triangles beautifully marking the way to keep me company, and the km sign-posts. The organisers, bless them, had actually put out 100 little pink km markers, so you didn’t need a GPS watch to keep track of progress. I guess the 2,000 walkers who started an hour after the runners need the signs, because their watch batteries wouldn’t go 24 hours. Imagine 24 hours through the night of this – trench foot, the lot. So much happier to be running.

And then 75kms and a miracle. It stopped raining. Leaden skies, cold as you like, but guess what. Nothing falling from the sky. It was about this point that it started to become a real challenge. Up to now, my strategy was perfect and perfectly do-able. Walk the hills and run the flats and downs (mud permitting). Now when I got to the top of a hill, it was VERY hard to start running again. It’s all in the head. Tell yourself that. It’s all in your head, so GET GOING. I would creak forwards and after five or six paces, I would be kinda running again, and I could keep it up until the next hill or stile. Oh yes, the stiles. How could I not mention the stiles. Hundreds and hundreds of them. Every design. Straight planks, cross planks, single planks, lift-up top bars. You name it. I climbed them. What do you feel like, stopping for another stile after 80kms? You feel like bloody murder, is what.

Now deep into the South Downs, passing lots of farms with “Trespassers will be shot… No really” signs on the gate. Lots of UKIP posters proudly displayed. I am hoping the organisers are not leading me to some sort of Deliverance or Cormac-McCarthy-type trauma. (“Please sir, I’m too thin to eat”.)

79kms. Only a half marathon to go. 84kms. That’s the double marathon done. 89kms. That’s the distance of the Comrades – the furthest I have ever run in a oner and it’s 11 hours exactly. But at 89kms, the vertical slab of hill I have been looking at for the last hour or so has arrived. Ditchling Beacon. 1 km of straight up. Ho hum.

At the top, and for the first time, there’s a first and last glimpse of blue sky. The view is simply wonderful, England in its green and fertile splendour, laid out for mile after mile. Shattered, but not so much that I can’t actually enjoy this moment. A man at the top tells me “It’s easy from here, downhill all the way”. He lied. Twice. It’s not “easy”. Nothing is “easy” after 90 sodden kilometres. Running is now very hard. Tell yourself, GET GOING. Doesn’t always work. Shout and swear at yourself. Doesn’t always work either. Eventually convince yourself it’ll be over a lot faster… that works. So you try to run, and it must look right comical. Now it takes more like 40 or 50 paces of creaking and stuttering, but eventually your legs stretch out, and you are in fact running again – and perversely almost praying for an uphill so you are “allowed” to walk again. 3kms descent and his second lie revealed itself, a monster climb back up again. 94kms passes. I try to convince myself that 6kms is nothing, I will be home in a trice. But it fails. Some treacherous part of my head is screaming “THAT’S A WHOLE OTHER HOUR. YOU CAN’T BE SERIOUS.” However, this sort of serves to get me running (or what now passes for running) at the top of the hill.

96kms. No emotion. 97kms. I am seriously cold. 98kms. Brighton in view. I perk up. I can see the racecourse, which means I can see the finish, which is an awful long way away. 99kms and I am now “running” around Brighton racecourse itself, only 4 furlongs to go. 3. 2. 1.

The first thing they tell me after I cross the line (about 12 hours, 30 minutes) is that the course record has been smashed. Some dude did it in 9:23. He runs this as a training outing for 100 milers. “That’s nice” I say.

There’s hardly anyone there. I estimate about 20 people tops got in before me, and I reckon I am the oldest by 10 years, the others all look mid-thirties and under. I am happy. I have another medal for the medal-chicken in the kitchen. I have a London2Brighton stick of rock, courtesy of the organisers. I am on the bus to the station. And I am home and in a lovely warm bath by 9:30 – when all those guys that ran those early hills will just be finishing. Tee Hee.

So why all of this effort? Why the countless* hours training? The answer is, of course, the latest and nastiest poaching crisis the world has seen. Africa is being hoovered-up, its minerals, hardwoods, birds and beasts taken and consumed far faster than nature can produce. The poor old, sad old, sleepy old rhino is being shot, poisoned, snared and wiped from the face of the world. The people who defend the rhino and who in doing so look after the land, the landscape, the ecosystem, our heritage and inheritance – they need our help. So, I ran, and you sponsored me. Without your sponsorship, believe it when I say, I would not have done this. I would not have got up at 4am on a miserable cold wet day to run 100kms other than to SAVE THE RHINO. So thank you for your generosity and your encouragement.

* Actually, they were counted hours; 131 of them according to my training diary – 948 miles since the start of September. Add in the race itself and that brings me to 1,009 miles in 9 months, just edging me ahead of Don Giovanni’s Spanish total.

Eaten on the day:

Despite that, I lost about 3.5kgs, and can no longer be seen sideways on.