You are here: Home » News » Help Save the Rhino win €25,000 to protect rhinos with Dragon Mania Legends 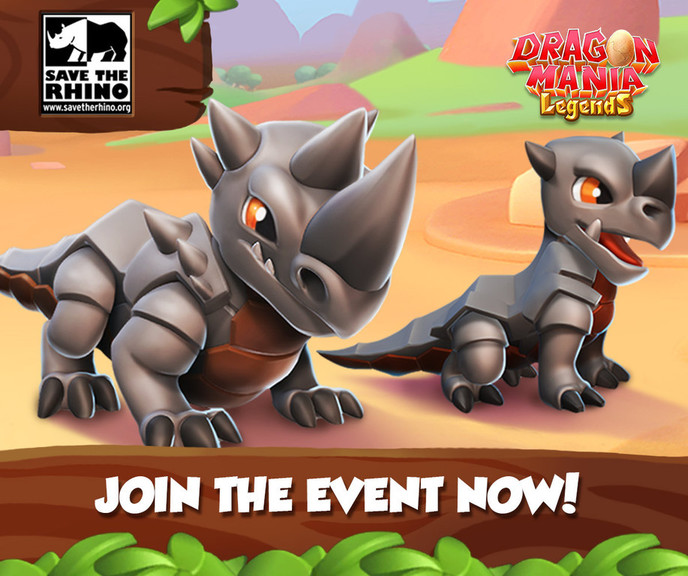 Save the Rhino has the chance to win €25,000 with Gameloft®’s Dragon Mania Legends® ‘Show Their Paws For Global Charity Event’ to protect rhinos and we need your help. Save the Rhino are one of the seven chosen charities in the competition with the opportunity to win €25,000 and you can help us win in three simple steps:

3. Donate your Golden Paws to #teamrhino’s YouTuber before Thursday 23 June 2016

If #teamrhino’s YouTuber receives the most Golden Paws in this competition out of the seven YouTubers before Thursday 23 June 2016, Gameloft® will donate €25,000 to Save the Rhino International to protect rhinos.

You can get ‘Golden Paws’ by completing in-game actions including:

Last year one rhino was poached every eight hours in South Africa alone on average. Rhinos are facing extinction in the wild in just 10 years at the current rate of poaching. You can help us win €25,000 in the competition to help towards our goal for all five rhino species to thrive in the wild for future generations. Thank you so much for your help.

A leading digital and social game publisher, Gameloft® has established itself as one of the top innovators in its field since 2000. Gameloft creates games for all digital platforms and with an audience of 157 million monthly users offers via Gameloft Advertising Solutions a unique level of visibility and involvement to advertisers. Gameloft operates its own established franchises such as Asphalt®, Order & Chaos, Modern Combat and Dungeon Hunter and also partners with major rights holders including Universal, Illumination Entertainment, Disney®, Marvel®, Hasbro®, Fox Digital Entertainment, Mattel® and Ferrari®. Gameloft distributes its games in over 100 countries and employs 6,000 people worldwide.

All trademarks referenced above are owned by their respective trademark owners.