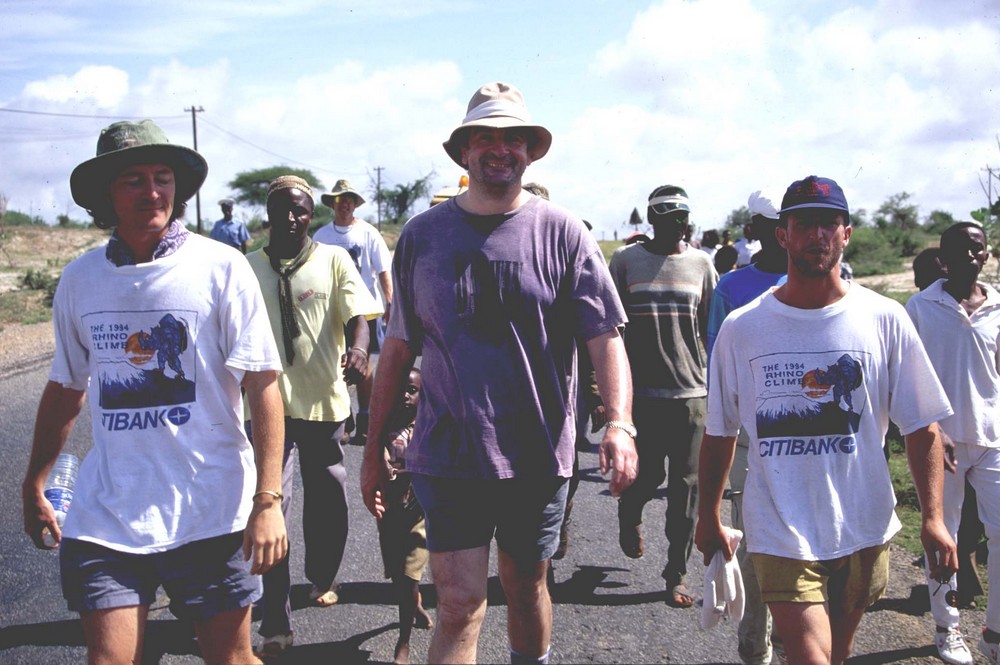 Today on 11th March Google doodle is celebrating the birthday of the late Douglas Adams, author of The Hitchhikers Guide to the Galaxy. The doodle, an interactive animation on Google’s home page, will be seen by millions of people across the world. On Tuesday 12th March, Save the Rhino and the Environmental Investigation Agency are continuing the celebrations, with a special lecture at the Royal Geographical Society in memory of Douglas.

As a founder patron of Save the Rhino, Douglas was passionate about environmental causes. In 1985 he joined zoologist Mark Carwardine on a trip to seek out some of the world’s most endangered species, resulting in a radio documentary and book, Last Chance to See. In 1994 he climbed Mt Kilimanjaro in a rhino costume with Save the Rhino founders Dave Stirling and Johnny Roberts to help raise money and awareness about rhinos, a species that have become increasingly endangered.

Last year at least 745 rhinos were killed across Africa. In South Africa alone, one rhino is now being killed for its horn every 10 hours. Experts predict that if rhino poaching continues to increase at the current rate, wild populations could start to decline in less than two years’ time.

After Douglas’ death in 2001, his family began working with Save the Rhino to set up the Douglas Adams Memorial Lectures. Each lecture focuses on a topic that Douglas was interested in, such as science, exploration, conservation and comedy. The lectures raise money for two of Douglas’ favourite charities, Save the Rhino and the Environmental Investigation Agency.

Scientist, writer and BBC presenter Dr Adam Rutherford will be giving this year’s lecture on Creation: the origin and the future of life. Stephen Mangan, best known for roles in the Green Wing, Episodes and Dirk Gently, will also be joining us as MC for the evening. They will be introduced by Cathy Dean, Director of Save the Rhino.