You are here: Home » News » Good luck to our Virgin London Marathon Team! 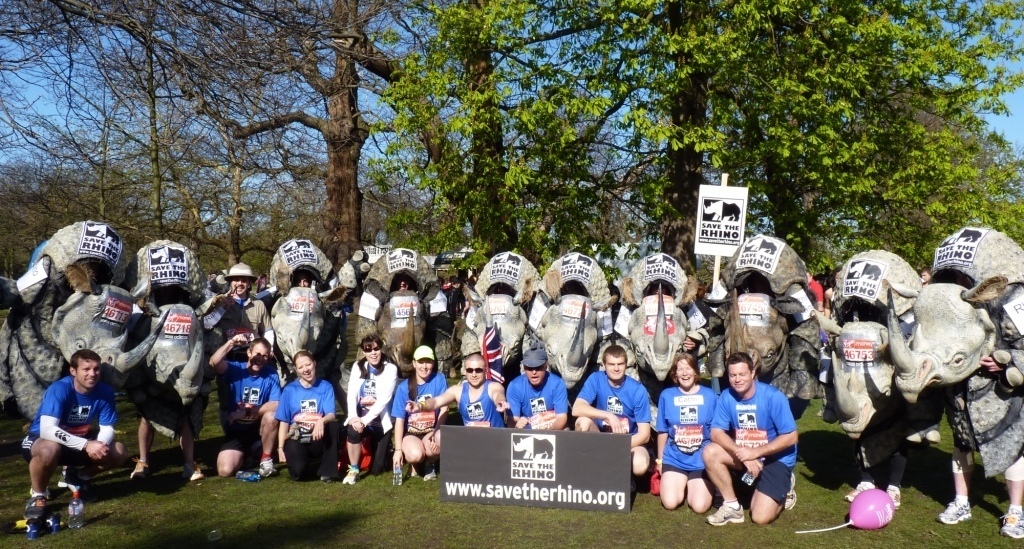 Starting in Greenwich Park, the runners will snake round the Thames to finish in St James’ Park with huge crowds cheering them on. In the recent ASICS promotional campaign, Vinny describes how “the reaction you get from the crowd when you’re running as a rhino is amazing”. This year 15 Save the Rhino runners will be dressed in costumes weighing up to 10kg to raise awareness and fundraise for Save the Rhino. Just like real rhinos, who generally suffer from poor eyesight, their costumed partners will find it hard to see with the large costume and rhino head impairing their vision. Vinny recalls running in the suit; “it’s hot, heavy, you can’t see and it’s incredibly noisy”.

This year’s team have been working hard to raise funds for Save the Rhino, hosting fun fancy dress parties, cake sales and gigs. One rhino costume runner, Sam, has made a brilliant video showing the day in the life of a rhino. The Virgin London marathon is Save the Rhino’s single biggest fundraising event of the year and is integral to our work in rhino conservation.

Months of training and preparations, from tackling long distance runs to giving up alcohol, have led the rhino runners to the big day. We want to wish all the amazing Save the Rhino runners the best of luck for the Virgin London Marathon. Thank you to everyone who is running for Save the Rhino and for all those who have supported them in sponsorship. We are excited to share the day with the team, and greet all our runners at the finish line to provide them with a picnic and well-earned massage.

Watch the day in the life of a rhino runner by Sam click here.

To find out what how much harder it is to run in a costume, watch Vinny’s ASICS running lab assessment video, click here.

One thought on “Good luck to our Virgin London Marathon Team!”