You are here: Home » News » Congratulations to our RideLondon team! 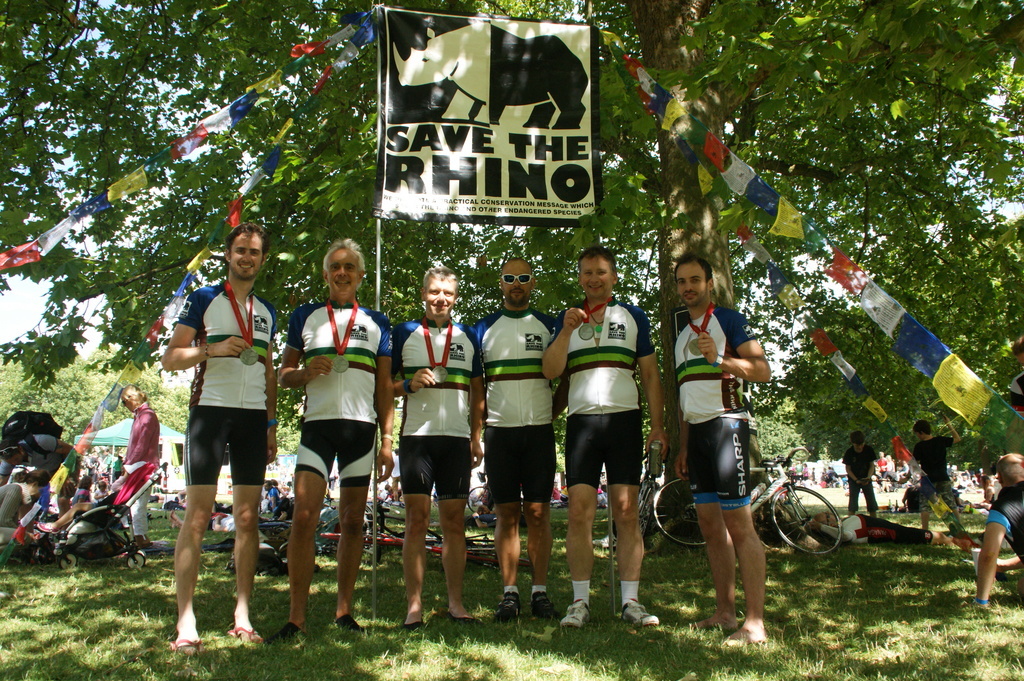 Yesterday, Sunday 4th August saw the first ever Prudential RideLondon-Surrey 100 sportive take place. 21 cyclists took on the challenge for Save the Rhino and we want to say a huge thank you to everyone who took part.

Over the past few months the team have been hard at work raising money – selling rhino cookies, hosting events, and asking friends and family for sponsorship – whilst finding the time for the many long weekend training rides needed to build up to the final 100 mile challenge.

The Save the Rhino team took to the road in a fleet of colourful blue and green cycling jerseys (and one particularly fetching rhino helmet). The ride itself started in the Queen Elizabeth Olympic Park, followed a route through central London and out into Surrey taking in Newlands Corner, Leith Hill and Box Hill, before winding back into London and finishing along the Mall in front of Buckingham Palace. Save the Rhino staff and volunteers hosted a post ride picnic in Green Park, close to the finish line.

The RideLondon-Surrey 100 was the highlight of a weekend of cycling events held as part of the Prudential RideLondon festival. Over 15,000 amateur cyclists took part in the 100 mile ride making it the biggest cycling sportive ever held in the UK. Fundraising is still coming in for the Save the Rhino team but it is likely that the team will have raised over £10,000 altogether – so once again a big, big thank you to our team!

If you are interested in taking on the challenge for Save the Rhino next year, the ballot for 2014 places opens on Monday, 12th August via the Prudential RideLondon website. Please email Laura, Save the Rhino’s Events Manager if you would like more information laura@savetherhino.org