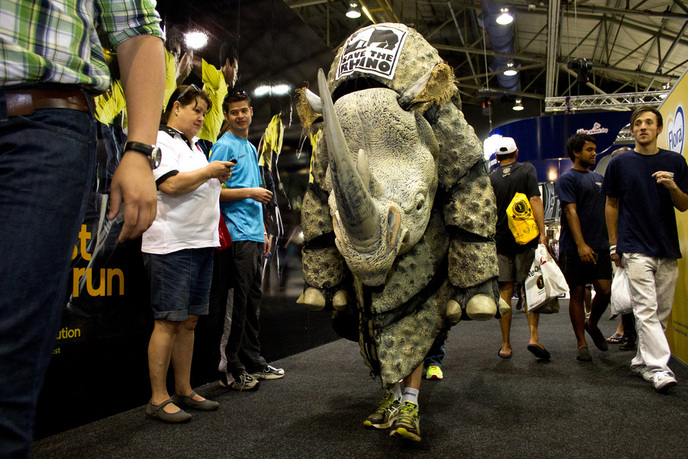 (May 31, 2013 Durban ) — Charity runner Vincent O’Neill, who will attempt to become the first person to complete the Comrades Marathon In a rhino costume solo, suffered a setback yesterday when his possessions were stolen at the Comrades Expo being held at the ICC exhibition Centre in Durban.

O’Neill’s red backpack was swiped as he gave a media interview at the ASICS stand at about 12.30pm. Sharp work from security officials at the Expo led to the recovery of the backpack in a toilet at the expo but his iPhone; iPad; laptop and 200 pounds was missing. He recovered his wallet and passport however.

It is the first time that the UK resident competes in South Africa and the theft took place just a day after he arrived in the country.

Yet despite the setback O’Neill, said he was committed to finishing the race and to raise as much money as possible for his charity Save the Rhino International, which raises money to fight rhino poaching.

“I was a bit devastated by the theft but I do understand that these things can happen anywhere in the world. My goal though remains the ultimate human race and pushing myself to the limit.

“My bank cards seem in order but I have cancelled them as a precaution. I run my own business and I’m afraid I have lost much of my work material.”

O’Neill appealed to anyone who could assist police to recover the devices and he has reported the theft to both the Comrades Marathon Association and the Berea police station.