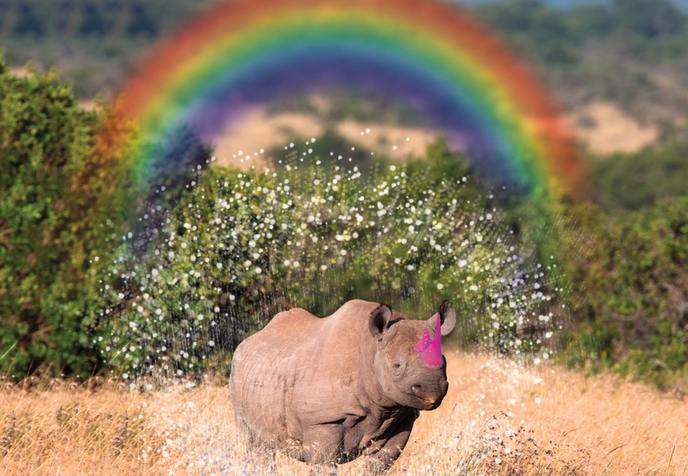 Credit: Steve and Ann Toon (with a little help from Alex Rhind)

It has long been a mystery where rhinos’ ancestry lies but, thanks to ground-breaking research from scientists at the University of Unicota, we have finally discovered that they are descended from unicorns.

Evidence suggests that the rhino shares many similarities with its legendary ancestor, such as their distinctive horns, swagger and sparkle.

Zoo-based rhinos, which are most easily studied, are often observed displaying what can only be described as ‘unicorn behaviour’ leaving behind piles of glitter and double rainbows wherever they graze or browse.

“It all makes so much sense now – the horn, the rainbows, the glitter and a fondness for all things pink. I just can’t believe we didn’t make this connection sooner. We have to do everything we can to save these incredible creatures and keep the unicorn in them alive.”

Unicorns became extinct due to human impact – poaching and habitat loss – and the same issues now threaten rhino populations in Africa and Asia.

We need to save these chubby unicorns and prevent them from becoming a mythical creature that exists only on pencil cases, rucksacks and kids’ pyjamas. Help us keep the sparkle of this world alive.

In case you haven’t worked it out, unicorns are mythological creatures and are not related to rhinos…

BUT rhinos are real and they are being killed every day for their horn.

It’s also true that zoo-based rhinos sometimes leave behind piles of glitter: keepers wanting to test whether a rhino cow is pregnant will mix a little blue or silver glitter into their food, so that they can identify which dung is which in the communal midden and then test the hormones in the glittery dung. Rhinos are very partial to pinkish-orange vegetables such as carrots. And the Latin name for the Greater one-horned rhino is Rhinoceros unicornis.

Help us save the chubby unicorn