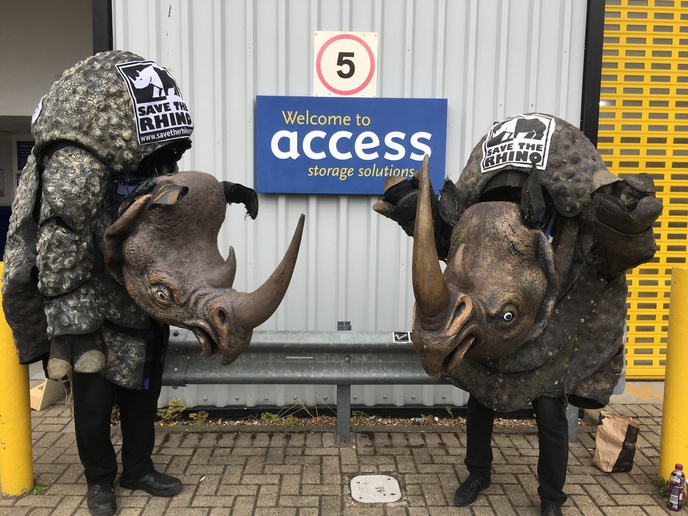 Here at Save the Rhino, we devote ourselves to protecting and increasing wild rhino populations across Africa and Asia. These animals’ lives are threatened on a daily basis by poachers, political conflict and habitat loss due to human activity. As a result, over the past century rhino populations have decreased from millions to less than 30,000 worldwide.

On World Rhino Day this year we were delighted to be supported in our efforts by Access Self Storage. Staff at the Tower Bridge branch, just around the corner from our office in Southwark, wore our iconic rhino costumes to serve customers all day long and set up a donation bucket in reception. On top of this, for every customer who books storage at the Tower Bridge store before the end of September, Access will donate £30 to Save the Rhino.

£30 could pay for veterinary treatment for three rhinos, so we are very grateful for every donation. If you would like to make a donation towards our conservation efforts you can also do so on our donations page

Access Self Storage Tower Bridge store manager Stefan Albert, one of the team who wore a rhino outfit on Friday says, “At Access, we’re always encouraged to get behind local community campaigns and with Save the Rhino storing with us, we really wanted to give this great charity as much support as possible. Dressing up as rhinos has certainly added a new dimension to our working day and, by the looks on our customers’ faces, it made a lot of people happy, while raising awareness of such a vital conservation mission.”

Josephine Gibson, Partnership Development Manager at Save the Rhino International, says, “Save the Rhino International collaborates with partners to protect endangered rhinos across Africa and Asia, so that rhinos can thrive in the wild for future generations. It’s great that Access Self Storage, our local storage centre, is supporting us by wearing our rhino costumes on World Rhino Day, helping us raise awareness about rhinos and collecting donations for rhino conservation. All of this helps us to continue with our work to protect endangered rhinos where they need our help the most.”.

Remember, anyone wishing to donate to Save the Rhino International can do so by visiting the Tower Bridge store before the end of September and contributing to the collection bucket in reception.