You are here: Home » News » From South London to South Korea – partnering to save rhinos around the world 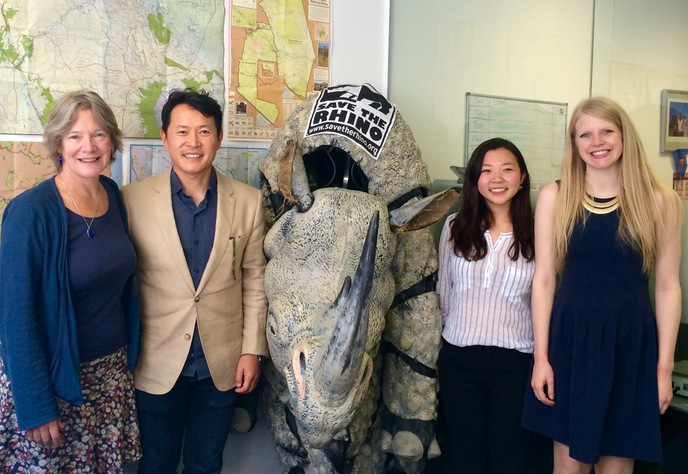 South Korean fashion brand PAT announced its partnership with the London-based conservation charity, Save the Rhino International to raise vital funds and awareness to protect rhinos in Africa and Asia. Jae Cho and his daughter, who have been lucky enough to see rhinos on safaris in Kenya and Tanzania, are dedicated to protecting this iconic species from disappearing from the wild.

Last year was the highest level of rhino poaching in Africa since the current crisis began in 2008, with 5,940 rhinos poached across the continent since 2008. Poaching for their horns is the biggest threat to the rhino’s survival, and there is a growing demand for rhino horn in countries in South East Asia such as Vietnam and China. South Korea took strong measures to reduce the demand in the 1980’s and 1990’s, resulting in the country no longer being involved as a consumer of rhino horn. Globally, the illegal trade of animals (including rhino horn), plants and fish is the fourth largest illegal trade (after drugs, arms and human trafficking). Trafficking gangs, pocketing millions of dollars annually, cause destruction to wildlife, threaten global security and affect employment of poorer local communities in areas reliant on wildlife.

To help protect rhinos in the wild, PAT, one of the oldest fashion brands in South Korea, has chosen to partner with Save the Rhino International. Like the charity, PAT also uses rhino as their brand symbol and protecting this beautiful species is not only a great cause but of a special interest. PAT will specially design two T-shirt designs for 2016 Autumn/Winter and 2017 Spring/Summer collections and will donate a percentage from the sale of each of the bespoke T-shirts. PAT has committed to raising at least £5,000 for Save the Rhino International, contributing towards the charity’s vision of all five species of rhino thriving in the wild for future generations. Save the Rhino International collaborates with partners across Africa and Asia and funds a wide range of activities needed to protect rhinos in the wild. These activities include anti-poaching and monitoring patrols, environmental education, translocations, community conservation and behaviour change campaigns to reduce the demand for rhino horn.

PAT commented: “we are very happy and excited to be supporting Save the Rhino International in their effort to protect such a beautiful species from extinction. Rhinos have been living on earth for 46 million years and at the current rate of population decline the species is expected to disappear by 2026, which would be tragic. What Save the Rhino International do to increase awareness, reduce poaching and demand are vital in slowing and eventually, reversing this population decline.  PAT have been using rhino as a brand symbol since 1971 and of course, we have special love for rhino and take special interest in protecting the beautiful species”.

Josephine Gibson, Partnership Development Manager of Save the Rhino International, commented: “we are very excited to launch our partnership with PAT. With such high levels of poaching, we really value PAT’s support in helping to protect rhinos. By designing bespoke t-shirts that will communicate about rhinos, our partnership with PAT will raise essential funds for rhino conservation and raise awareness with new audiences in South Korea. With rhinos facing extinction in the wild in just 10 years at the current rate of poaching, we value PAT’s passion for protecting rhinos”.

PAT has been making clothes that are high quality, comfortable, stylish and durable for the past three quarters of a century. And PAT continues its quest to become a ‘Town Affordable Luxury Brand’ of choice. PAT does this by the following strategies:

You can read more about how countries in South East Asia have tackled the demand for rhino horn here.To find out more please visit www.savetherhino.org (UK registered charity 1035072).