You are here: Home » News » First rhino sighting in Vietnam for five years 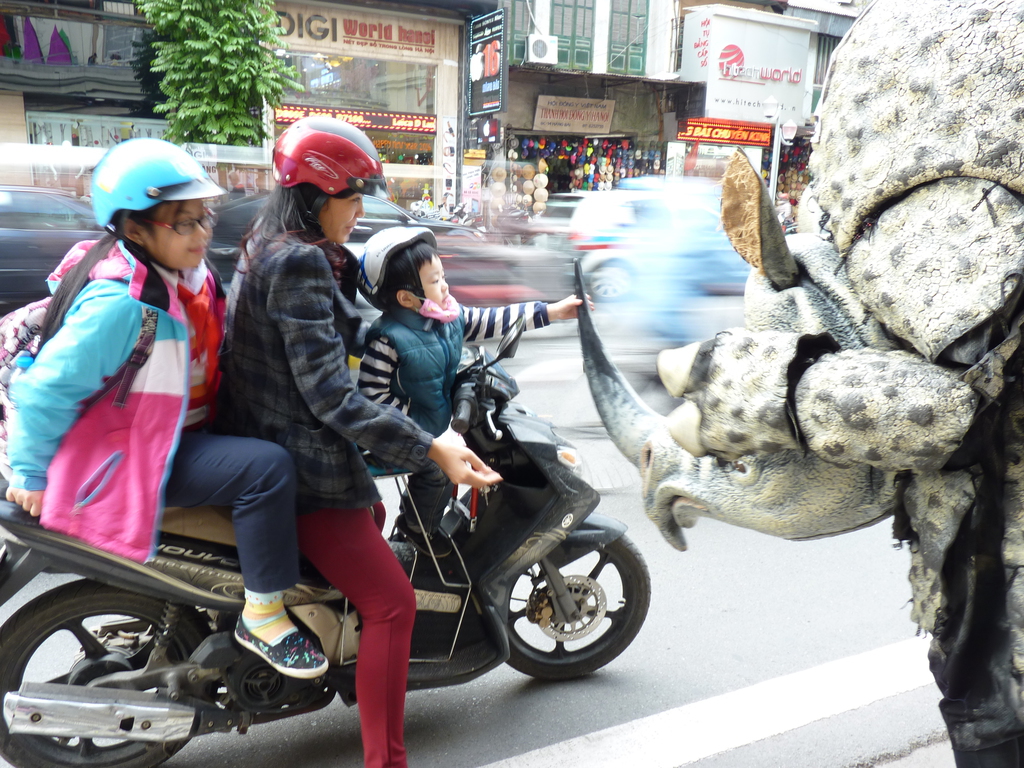 This Sunday 13 December Vietnam will see its first rhino in five years, since the last wild Javan rhino was illegally and tragically killed in the country back in 2010.

Sadly, due to the worst global poaching crisis in history, this will not be the real thing but one of Save the Rhino International’s 18 famous rhino costumes taking part in the ninth Song Hong Half Marathon which has been organized by the Red River Runners in Hanoi, who have aptly themed it “Run for Rhinos”.

With Vietnam the key consumer country for rhino horn – now valued higher than gold – Save the Rhino International (SRI) and its partners Education for Nature Vietnam (ENV) and the International Rhino Foundation have joined forces to translocate this unique endangered rhino costume from the UK to Vietnam to help raise awareness amongst Vietnamese citizens. In Vietnam rhino horn is increasingly used as a status symbol and perceived miracle cure for a variety of ailments from cancer to hangovers.

Josephine Gibson, an employee of SRI, will take part in the event wearing the iconic 8kg rhino costume and running alongside ambassadors from the UK, South Africa, US, Holland and France highlighting that this is not just a problem that needs to be tackled in African countries but also by the rest of the world. If poaching continues at the current global rate, rhinos are expected to be extinct by 2026, in just 10 years’ time.

The UK government has provided £13 million funding over four years (2014-2018) to the Illegal Wildlife Challenge Fund and led many initiatives, all heavily supported by Prince William, to tackle the illegal wildlife trade. This includes organising the London Conference on Illegal Wildlife Trade in 2014 which brought together heads of state to sign the London Declaration. The UK will attend the next conference on the illegal wildlife trade, which will be hosted in Vietnam in 2016.

“Ending the illegal trade in wildlife products is a priority for the British government.  In Vietnam, we’ve been working closely with the government and with NGOs and civil society to tackle this issue, and to reduce demand for rhino horn and other products from endangered species.  I’m delighted to be taking part in this year’s Hanoi Half Marathon for Wildlife, together with several of my British Embassy colleagues, in order to show our support for this important cause.”

“We are thrilled that Vietnamese citizens and the international community in Vietnam are running together for rhino protection. We hope the Run for Rhinos will showcase to the world that we as a nation are dedicated to ending the killing of rhinos and consumption of rhino horn, and that the collaborative spirit of this event will continue as we fight to save this precious species.”

Josephine Gibson of Save the Rhino comments:

“With one rhino killed every eight hours on average in South Africa this year, urgent action is required to protect rhinos. I am delighted to ‘Run for Rhinos’ in Hanoi Red River half marathon in our iconic rhino costume. I look forward to joining Vietnamese and other international runners in raising awareness about the importance of saving this iconic species from extinction.”

The famous rhino suits have been all around the world, from the top of Mount Kilimanjaro in Tanzania to the Atacama Desert in Chile and of course the London Marathon every year, but this is their first visit to Vietnam.

Read about Rocky’s adventures in Vietnam on our blog

2 thoughts on “First rhino sighting in Vietnam for five years”