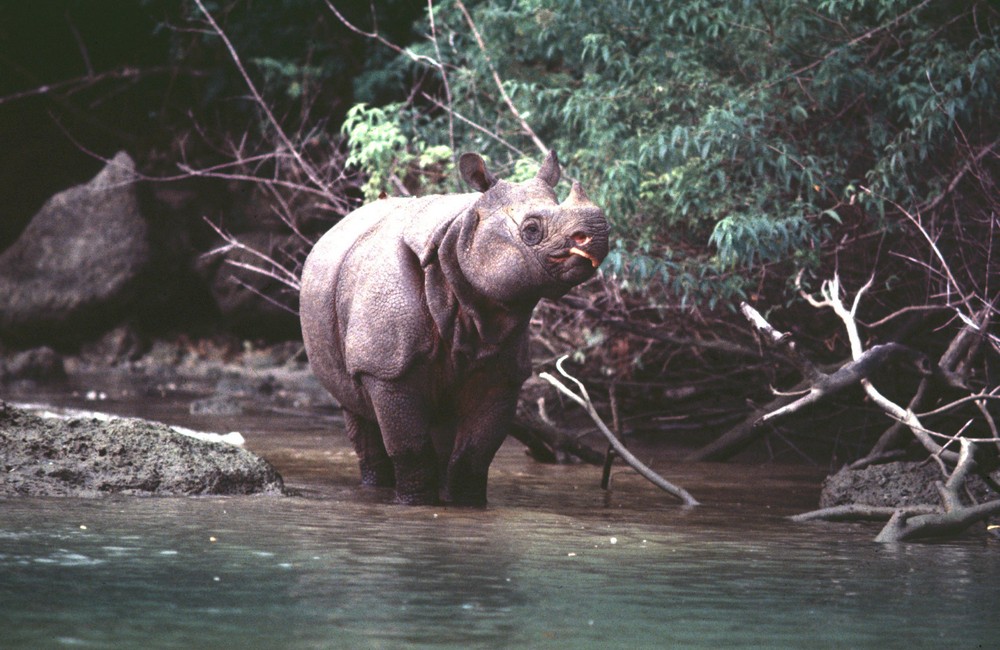 We’re delighted to share the good news that the total population of Javan rhinos has increased from 68 to 72 individuals! Following analysis of the results of a camera-trap survey conducted in September 2019, Indonesia’s Ministry of Environment and Forestry announced the Javan rhino success, thanks to recent births of four calves.

All of the world’s Javan rhinos live in Ujung Kulon National Park, on the western tip of the island of Java. Ten years ago, it was believed that there were fewer than 50 Javan rhinos in the Park, and it is testament to the long-term efforts of rangers, Park managers and officials that the population has been able to grow.

Despite all living in one relatively small location, Javan rhinos are not easy to spot. Even the rangers that patrol the Park every day often won’t see a rhino for months at a time: in 2017 only three direct rhino sightings were recorded by Rhino Protection Units (RPUs). Instead, they look for tell-tale signs – rhino footprints and dung – and identify rhinos through images from carefully placed camera traps.

Alongside rhino population monitoring, RPUs also protect the Park from illegal activity, reducing the threat of poaching for rhinos and other wildlife. Thankfully, no rhino poaching has taken place in Ujung Kulon National Park in more than 20 years, yet illegal activities including logging, bird hunting and encroachment is often detected by the Units, who then confiscate wildlife products, nets or snares and, if possible, arrest the perpetrators. This work is vital to protect the Park and all its wildlife, which includes many endangered species and is a designated UNESCO World Heritage Site.

In addition, teams work within the Park to improve the habitat, making it a healthy, resilient ecosystem in which the rhinos can live and breed. One of the current challenges is the invasive Arenga palm plant. In the Javan Rhino Study and Conservation Area, a 5,000 ha area in the east of Ujung Kulon, the invasive plant has been crowding out native species that are more palatable and nutritious for Javan rhinos.

Thanks to sustained efforts by our partners in Indonesia, Yayasan Badak Indonesia – The Rhino Foundation of Indonesia, large areas of Arenga have now been cleared, allowing other plants to recolonise the area, and creating more good habitat for the expanding population of Javan rhinos. This project has already seen some success, with the latest camera-trap data showing that at least eight rhinos frequently use the restored area!

Cathy Dean, CEO of Save the Rhino International, says:

“Raising funds specifically for Javan rhinos is hard. Few people have heard of them, fewer have ever seen them. So we are delighted that, thanks to the generosity of our supporters, who have donated significant unrestricted funds this year, we will be inviting the International Rhino Foundation, our funding partners for Indonesian rhino programmes, to apply for up to £50,000 to support work to eliminate the Arenga palm in Ujung Kulon National Park. We’ve already seen the results of previous efforts rewarded; let’s encourage some more breeding success!”

Undoubtedly there is more work to do; continuing to protect and monitor the rhinos within Ujung Kulon, as well as looking for a second, suitable site, so that we don’t have all the world’s Javan rhinos in one ‘basket’. Only 50 years ago, the entire Javan rhino population was thought to number between 21 and 28 individuals. The increase to more than 70 animals today is a huge achievement, giving everyone hope that with sustained, strategic efforts, Javan rhinos, and other Critically Endangered rhino species, can thrive.