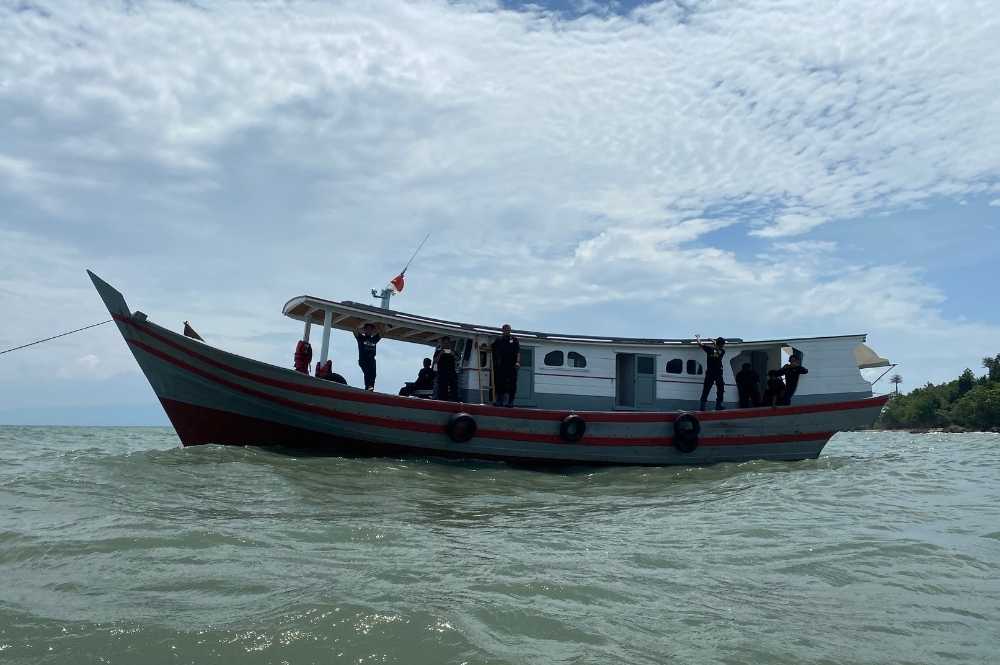 Ujung Kulon National Park sits on the westernmost tip of Java in Indonesia. It is a dense rainforest area, crisscrossed by rivers and featuring a peninsula that juts into the Indian Ocean. It is the home of all 75 remaining Javan rhinos. Once as few as 40 individuals, intensive protection efforts have helped to stabilize and grow the population.

Javan rhinos love water and it’s also important for them to supplement their diet with salt. They have historically been sighted along the Park’s beaches for this reason. But in recent years, as more fishermen have built illegal fishing platforms along the northern peninsula, fewer and fewer rhinos have been seen. Instead, they must traverse much greater distances inland to find plants that contain enough salt.

While there have been no Javan rhino poaching incidents in the Park since 1998, Park staff estimate that around 50% of people committing illegal activities in Ujung Kulon are entering from the coast, pulling up on the same beaches that the rhinos use.

The Marine Patrol consists of two four-person Units, each led by a Park ranger. Each new member of the team was recruited from the communities surrounding Ujung Kulon, and those selected underwent extensive training in rhino protection.

Each Unit spends 15 days patrolling the waters before heading back home and rotating with the alternate team. As well as protecting the coastline, the Unit also collects information on the area’s biodiversity, recording wildlife signs and sometimes, if they’re lucky, spotting rhinos!

The teams patrol using a boat that was built in Sumatra in October 2019. As it’s made from wood, the boat will last longer than fibreglass in the rough seas and will be easier to repair when damage occurs. The boat is large enough for a crew of four to live aboard and equipped to be a floating ranger station with radio, first aid kit, kitchen and other necessary patrol equipment.

A small ‘ketinting’ boat was also purchased for the patrol. The ketinting is fitted with a faster engine and is pulled alongside the larger patrol boat, ready to be used to pursue suspects when necessary. During the first 12 months of operations, both boats have been essential. In this short time, the marine patrol units apprehended 220 people illegally fishing and encroaching Ujung Kulon’s waters.

Now that the Marine Patrol Unit effectively keeps illegal fishermen away, the hope is that more rhinos can once again return to the beaches.

Written by Christopher Whitlatch, Communications Director, International Rhino Foundation. A version of this article was originally printed in our annual supporter magazine, The Horn.