You are here: Home » News » The community saving the Sumatran rhino 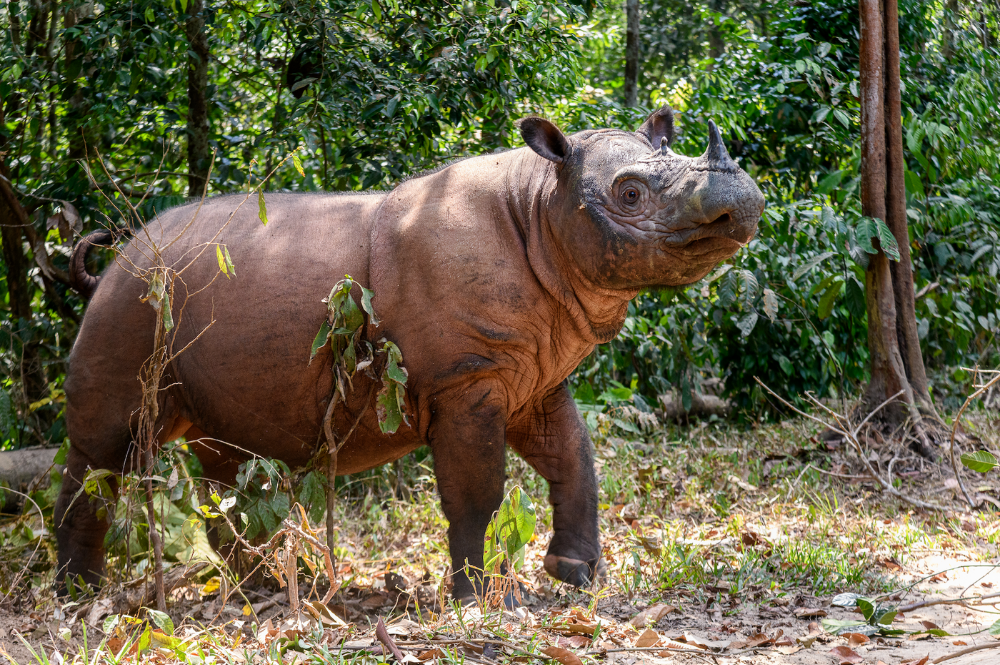 Conserving rhinos is as much about people as it is about rhinos. You may think that’s because people are to blame for the most urgent threats that rhinos face: habitat loss and poaching. And you’d be right! But while it’s true that people are so often the problem, it’s also true that people need to be, and often are, part of the solution. People from across the world, just like you and me, must act if we are to save rhinos.

Sometimes that action is running a marathon and inspiring people to donate to conservation. Other times, the action is a little closer to a rhino’s home, and it needs a whole community to get behind it. This World Wildlife Day, we’re celebrating one community in Indonesia that’s taking incredible action to save the Sumatran rhino.

The Sumatran rhino is arguably the most endangered large mammal in the world. With fewer than 80 animals left, all living in small, fragmented populations, there’s no time to waste if we are to save the species from extinction. To boost the numbers of Sumatran rhinos, it’s essential that we increase breeding efforts and provide secure places for these rhinos to go. Together with the Government of Indonesia and a large coalition of partners, we’re working to achieve both of these goals: developing successful breeding programmes in rhino sanctuaries, while ensuring that there are safe and suitable habitats for every animal to live in the wild.

Such wild habitats cannot simply be ‘found’, there are many factors to consider: how much space is required; how close is the new habitat to current habitats; does it have the right food and water supply? Sometimes, the best approach is to restore a place that was previously suitable, but has since been degraded.

Way Kambas National Park, on the island of Sumatra, is the only protected area in Indonesia with no buffer zone – it is surrounded by villages on all sides. As human populations increase and communities expand, encroachment into the Park has, overtime, destroyed much of the habitat that rhinos and other wildlife need to survive. Sadly, around one-third of the rhinos’ rainforest habitat has already been lost.

Reforestation can be difficult; fires, tsunamis and other natural disasters threaten huge setbacks. And, of course, like any conservation project, the commitment of local people is crucial. People who live close to wildlife need to find ways to coexist peacefully with potentially dangerous animals, reducing conflict to a minimum and finding sustainable livelihoods that allow both themselves and their local wildlife to thrive.

Around Way Kambas, local farmers grow new seedlings to replant the site, and people from a nearby village earn income from planting seedlings, maintaining the area, and later harvesting browse from mature trees to feed the rhinos at the nearby Sumatran Rhino Sanctuary. Once planted, trees should grow to maturity in just four or five years.

Around the edge of the village, people plant fruit trees that they can later harvest to eat or to sell. At the core of the restoration area, they plant rhinos’ preferred foods. And one plant, the jackfruit tree, is grown in both areas: it is liked by both humans and rhinos!

This involvement and close collaboration of local people, local and national government and international conservation expertise is critical to protect Sumatran rhinos. Not only does it boost immediate conservation activities, but it also demonstrates how people can live sustainably alongside wildlife, a vital lesson if we are to build a world in which both growing human populations and all five species of rhino can thrive.