You are here: Home » News » A story of hope: An extremely rare Sumatran rhino has been born! 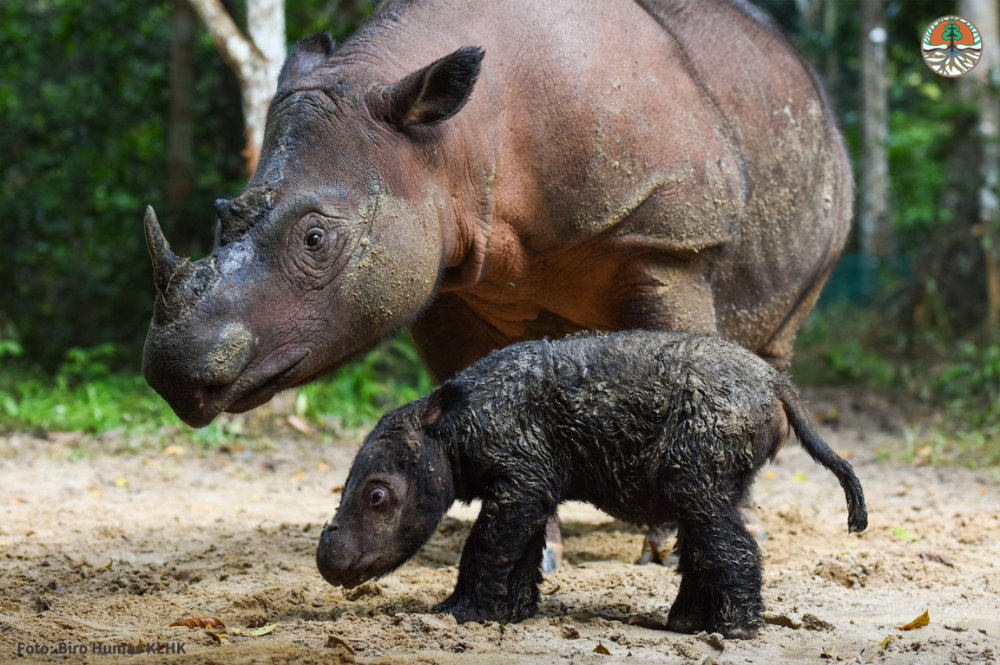 There is new hope for Sumatran rhinos as a third calf was born on Thursday 24 March at the Sumatran Rhino Sanctuary, in Way Kambas National Park, in Indonesia. The calf, a female, and her mum, Rosa, are spending their first few days bonding in the semi-wild environment of the Sanctuary, under the watchful eye of expert vets.

Her birth is a huge milestone in Sumatran rhino conservation and a result of dedicated work by many people around the world.

Cathy Dean, CEO of Save the Rhino International, says, “This is fantastic news for Sumatran rhino conservation and we’re so excited that Rosa and her new calf are healthy and doing well. The birth wouldn’t have been possible without the commitment of the Indonesian Ministry of Environment and Forestry and our many NGO partners in Indonesia and around the world.”

There are fewer than 80 Sumatran rhinos left, all living in a handful of small, isolated populations on the Indonesian islands of Sumatra and Borneo. After several unsuccessful pregnancies in recent years, Rosa finally fell pregnant in 2020, and teams have been working relentlessly to ensure her health and safety.

Cathy Dean continued, “We’ve been holding our breath since finding out Rosa was pregnant. Rhino pregnancies aren’t easy, so it’s wonderful to be able to celebrate this birth and know that there’s one more Sumatran rhino in the world. However, the fact that we are so excited about the birth of one rhino highlights that these wonderful animals still teeter on the edge of extinction. But today’s news brings us hope for their future.”

Since the early 2000s, Save the Rhino International has been supporting the Sumatran Rhino Sanctuary and the Rhino Protection Units working to find and protect Sumatran rhinos in Indonesia. Our support has included helping to cover the core costs of the Sanctuary, and more recently increasing its capacity, doubling the space available for current and future rhinos. The state-of-the-art breeding facility is a major achievement, and will be essential for this new calf and, we hope, others just like her in the future.

“We’d like to congratulate everyone involved, including the Government of Indonesia, YABI, the International Rhino Foundation, all Sumatran Rhino Rescue partners, and of course, the many organisations and members of the public that continue to support efforts to save Sumatran rhinos,” said Cathy Dean.

All images courtesy of the Indonesian Ministry of Environment and Forestry.

Further information about the birth

Rosa had lost eight pregnancies to date. Because of her medical history, the veterinarians and staff at the SRS will continue to monitor Rosa and her calf very closely. International veterinary experts in the U.S. and Australia who have assisted with previous Sumatran rhino births were available for consultation during the pregnancy and are working together with the SRS staff to respond to any medical issues that Rosa or the calf may have.

“With the birth of Rosa’s calf at the Sumatran Rhino Sanctuary, we hope to continue to receive happy news from the births of other Sumatran rhinos in the future,” concluded Wiratno, Director General of KSDAE.

The SRS is closed to visitors to allow Rosa and her calf to bond. The SRS continues to follow strict visitation protocols put in place because of the global pandemic and is open by invitation only. Save the Rhino International will continue to work alongside our colleagues around the world, and particularly our partner the International Rhino Foundation, to provide regular updates from the Indonesian Ministry of Environment and Forestry about Rosa and her calf via our website and social media channels: www.savetherhino.org

Unlike most Sumatran rhinos, Rosa exhibits none of the shy, solitary behaviour normally associated with her species. Beginning in late 2003, Rhino Protection Units (RPUs) working in Bukit Barisan Selatan National Park in western Sumatra began receiving reports from local villagers that a young Sumatran rhino had frequently been observed walking along one of the main roads crisscrossing the park and browsing for vegetation in villages around the park boundaries. These reports were extremely unusual – generally, Sumatran rhinos are shy and secretive, avoiding humans and their settlements at all costs, preferring to live in thick, isolated forests and moving mostly by night. Rosa, however, somehow became used to being around humans and became extremely comfortable living and feeding nearby. Unfortunately, this unique behaviour put her in danger.

Immediately upon receiving these reports, Rhino Protection Units began tracking the rhino, looking for footprints, dung, wallows, and other typical rhino signs. They soon found Rosa, and a special unit was permanently assigned to observe and protect her.

After many discussions between Indonesian authorities, park officials, veterinarians and rangers, it was decided that Rosa’s behaviour continued to put her at too much risk. In 2004, she was moved to the Sumatran Rhino Sanctuary in Way Kambas National Park, where she could be better protected. At the Sanctuary, all seven rhinos reside in large, open forest areas where they can experience a natural habitat while still receiving state-of-the-art veterinary care and nutrition.

Rosa adapted well to her life at the Sanctuary, continuing to exhibit her unique behaviours, including making loud vocalisations when around people, or when approaching her regular feeding time. Rosa also “sang” while happily wallowing in her mud holes.

The father of this calf is Andatu, the first Sumatran rhino ever born in captivity in Indonesia. Andatu is almost 10-years old and recently reached sexual maturity. His birth in 2012 was the historical culmination of robust international cooperation. Andatu’s father, Andalas, was born at the Cincinnati Zoo & Botanical Garden on 13 September 2001 and was moved to Indonesia when he was six. Andatu’s mother, Ratu, was born in Way Kambas National Park, but wandered outside the Park’s boundaries in 2005 and was brought to the SRS.

Andatu’s name is a combination of his parents’ names and means “Gift from God.” The second birth at the SRS was his little sister, Delilah, who was born in 2016.

Save the Rhino International is a UK registered charity (no. 1035072), established in 1994, with a vision to see all five rhino species thriving in the wild. Since 2018, the charity has provided more than £200,000 in grants towards the Sumatran Rhino Sanctuary and Sumatran Rhino Rescue efforts, thanks to support from its partners and donors.

One thought on “A story of hope: An extremely rare Sumatran rhino has been born!”