You are here: Home » News » A future for Sumatran rhinos 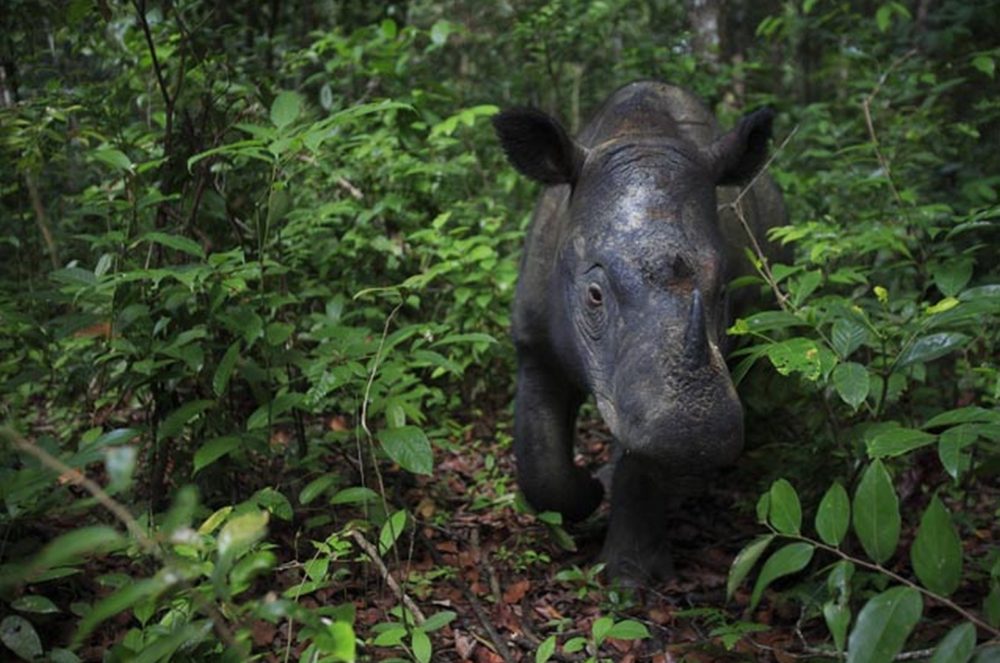 The Sumatran rhino is a species on the brink of extinction. But a new international partnership, the Sumatran Rhino Rescue Project, is bringing hope for their future.

Thirty years ago, it was estimated that there were as many as 800 of these animals in the wild; today, fewer than 80 individuals remain, hanging onto existence in five small populations across the islands of Sumatra and Borneo. The decline of the species was initially caused by habitat loss and poaching for their horns, threats that continue to persist.

The isolation and fragmentation of these populations means that it is difficult for Sumatran rhinos to find partners for successful breeding and in turn, it’s been hard to build up their numbers. While other rhino species such as the Northern white rhino – of which only two females remain – need artificial means for any chance of producing new young, Sumatran rhinos tend to require a slightly different approach.

Historically, captive breeding efforts for the Sumatran rhino have proved hugely challenging, largely stemming from a lack of knowledge about the species itself. However in 2001, after years of intensive research and effort, Cincinnati Zoo welcomed little Andalas, the first Sumatran rhino to be bred and born in captivity in 112 years. Andalas’s birth raised hopes for the future of his species.

Since Andalas was born, more efforts have gone into breeding the species in more natural environments and closer to their original home. The Sumatran Rhino Sanctuary (SRS) in Indonesia is at the heart of these endeavours. The Sanctuary was set up with a plan to use the knowledge already gained to breed more Sumatran rhinos through a managed but natural process and eventually reintroduce as many rhinos as possible to the wild.

Andalas (pictured above as a calf and on the right as an adult) now calls the Sanctuary home. Since moving from North America he has mated successfully with another rhino there, Ratu, to bring two wonderful calves into the world: Andatu in 2012, and Delilah in 2016.

Today seven rhinos live at the SRS but, as we hope that more calves will be born soon, the Sanctuary is being expanded to create more space for this Critically Endangered species.

The Sumatran Rhino Rescue project will not only expand the current Sanctuary but also build two new centres in Kalimantan and northern Sumatra during the next 20 years. With more room available, those rhinos with a good chance of reproducing will be captured and looked after by experienced veterinarians to give them every opportunity to mate successfully. The project also plans to create Intensive Protection Zones so that rhinos not inside the sanctuaries are kept safe.

“The Sumatran Rhino Sanctuary is a lifeline for the species’ future. It’s thanks to the commitment and knowledge of everyone in the team that any successful breeding has been possible to date. The expansion and creation of new places are crucial steps to give Sumatran rhinos the helping hand they desperately need to build their numbers to more sustainable levels. We believe the Sumatran Rhino Rescue project gives us the best chance for the rhinos’ survival.”
Cathy Dean, Save the Rhino International CEO.

With the generous support of our members, supporters and partners, we’ve been able to provide US $100,000 funding for this vital expansion work, helping fund not only the construction of the new sites, but also the necessary equipment and costs involved for the people making this whole project possible.

We’re really glad to be part of this project, joining forces with other rhino conservation charities including the International Rhino Foundation, Global Wildlife Conservation, IUCN SSC, National Geographic and WWF to help secure a future for all Sumatran rhinos.