You are here: Home » News » Greater one-horned rhinos on the rise! 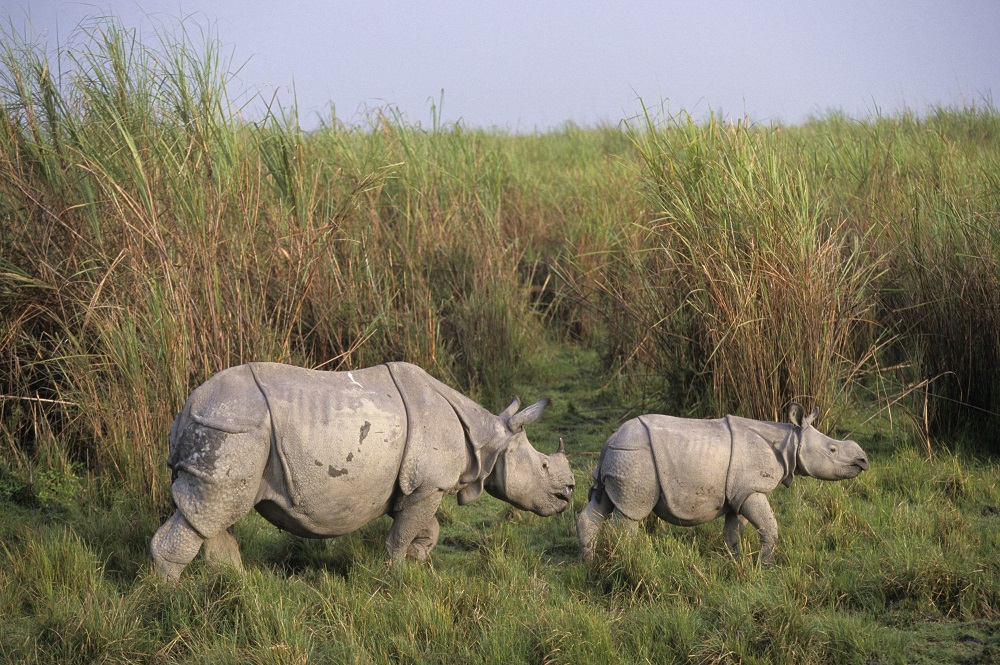 Over the past month, officials in several of India’s national parks have been conducting a rhino census to confirm the country’s total number of Greater one-horned rhinos. So far, the census has brought good news! Since the last counts, which took place in 2018 and 2019, rhinos have increased in four key areas: Kaziranga National Park, Pobitora Wildlife Sanctuary, Jaldapara National Park, and Orang National Park. One more place, Manas National Park, has not yet released census results, but recent calf sightings indicate a positive trend for the Park’s rhino population.

Currently, counts suggest that rhinos in the reserves have increased by approximately 10% since the last count. This is great news for several reasons. Firstly (and perhaps we’re biased) it is simply great to have more rhinos in the world because they’re incredible animals! Secondly, with fewer than 4,000 left in the world, increasing numbers means that Greater one-horned rhinos are further away from the threat of extinction. And lastly, with accurate and up to date population counts, plans to conserve the species can be improved, helping us to keep Greater one-horned rhinos on the rise.

Greater one-horned rhinos are listed as ‘Vulnerable’ by the IUCN, meaning that they face a high risk of extinction in the wild. Whilst relentless poaching caused their numbers to plummet during the 19th and 20th centuries, it is not, thankfully, the biggest threat to their survival today. Habitat degradation and limited space, due to increasing human encroachment, development, and disturbance, alongside impacts from severe weather events such as flooding, make it difficult for the rhinos to thrive. In 2020, for example, at least eight rhinos died due to intense flooding in Kaziranga National Park. Thankfully, the latest news shows that despite the challenges, there are currently more rhino calves being born than rhinos lost.

But other than numbers increasing, what does the latest count tell us? It shows that the work already being carried out is paying off. Expanding habitat, deterring poaching gangs, and providing better quality habitat for rhinos are all initiatives that are helping the species to breed successfully. Yet, there’s much more that we’ve got to do.

Without more space, rhino populations can only increase so far. Therefore, securing more habitat is essential. And of course, these habitats must have the right food, access to water, security from poaching, and resilience to the impacts of the climate crisis. Finding such places is increasingly difficult, but one of the best places to start is to look at the reserves and areas where rhinos used to live. Whilst poaching may have driven rhinos to extinction there before, well-thought-out plans and continued security measures can help them thrive there in the future.

Alongside our international partners, we’re supporting this work through Indian Rhino Vision 2.0 (IRV2). IRV2’s main aim is to expand the habitat available for Greater one-horned rhinos, mostly by reintroducing rhinos into the Parks from which they previously disappeared. Over the coming years, this work will be critical to ensure that the number of Greater one-horned rhinos continues to rise.