You are here: Home » News » Delilah, the singing Sumatran rhino 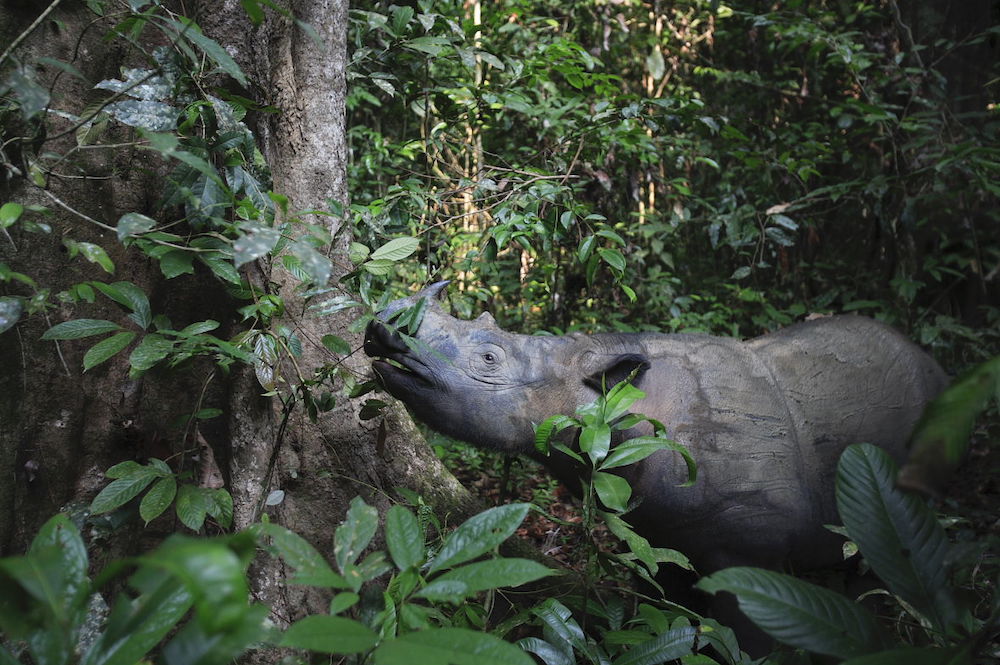 I recently took a trip to Indonesia, visiting our friends and colleagues at the Sumatran Rhino Sanctuary. On my last morning in Indonesia, I met the youngest of the group of seven rhinos cared for in the Sanctuary. Born in May 2016, she is the second calf to her parents, Andalas and Ratu. The Indonesian President, Joko Widodo was invited to name this precious animal, and chose ‘Delilah’. Apparently it means “God’s blessing” in Javanese, but I prefer to think that the President is a big Tom Jones fan.

Delilah is pretty special in many ways. She’s the first female Sumatran rhino born in captivity in Indonesia for more than 100 years. (Her older brother, Andatu, was the first male born at the Sanctuary.) She’s already bigger than her mother, Ratu, who has charmingly short legs.

For 23 hours a day, Delilah and Ratu forage, wallow and meander through a large patch of pristine primary rainforest, deep inside Way Kambas National Park. In the wild, Sumatran rhinos are largely solitary, except for mothers with calves, and when males and females come together briefly to mate.

For an hour every morning, Delilah and Ratu, and the other five Sumatran rhinos, come to their bomas (enclosures). Tempted in with food treats (freshly cut ficus leaves, lianas that the rhinos chomp on like liquorice sticks and watermelon), the rhinos are checked over thoroughly by their keepers. Ticks and leeches are pulled off, eyes and feet inspected, occasionally the vets take blood samples for analysis. Throughout all the checks, the rhinos placidly munch away at a rapidly dwindling pile of browse. In addition to all the leaves and twigs they find for themselves in the forest, they each get through 50 kg of foliage per day that is brought in.

Delilah’s real talent though is singing. As one of the keepers hoses her down – Sumatran rhinos love water – she croons away. Think of the sounds made by humpback whales, or by Oliver Postgate’s Clangers, and you’re getting close. No one really knows why Sumatran rhinos sing, though it’s suspected that it’s to help find potential mates in the dense forest. Delilah’s still too young to breed, she’ll only reach sexual maturity when she’s about seven years old, but she’s certainly warming up her vocal chords. Her keepers affectionately call her Adele. Perhaps she’s singing the Sumatran rhino equivalent of Hello.

A lot of hopes rest on Delilah. There are fewer than 80 Sumatran rhinos left in the whole world, now confined to just five locations: one animal in Sabah (the Malaysian bit of Borneo), a few in Kalimantan, and the rest in three national parks in Sumatra: Gunung Leuser, Bukit Barisan Selatan and Way Kambas National Parks. Finding other rhinos, let alone ones of the opposite gender and of breeding age, is hard.

The Sumatran Rhino Rescue Project, to which we’ve contributed $100,000, is a three-part plan that will build capacity (more rhino sanctuaries and veterinary expertise), search for and rescue isolated individuals to bring them into one of the sanctuaries, and then protect and breed as many rhinos as possible, to maintain genetic diversity. The wild populations, meanwhile, are also being monitored and protected, by four-man teams composed of one person from the Ministry of Forests and three people from the Indonesian Rhino Foundation, YABI.

Breeding age females are a vital part of the Project. All rhinos breed slowly: they only have one calf at a time, the gestation period is 16 months and, as far as we know, the gap between calves is around three or four years. One female Sumatran rhino might, therefore be able to have six or seven calves in her lifetime, but again, we don’t really know. Delilah is related to all the male rhinos cared for in the Sanctuary: Andalas, her father; Andatu, her brother; and Harapan, her uncle. The Sumatran Rhino Rescue Project aims to locate other males, who could become mates for her.

Meanwhile, Delilah continues to sing in the shower. My fervent hope is that in two years’ time, she won’t be singing to herself, but to an eligible bachelor.