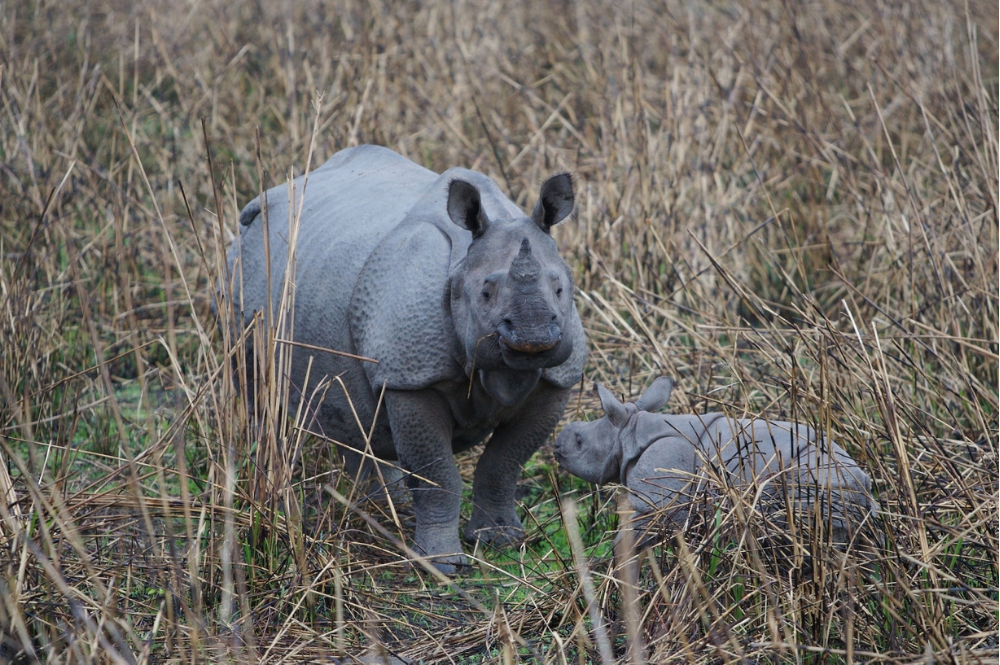 The Greater one-horned rhino is something of a conservation success story.

Once so common that they were referred to as ‘agricultural pests’, in the early 1900s the species numbers had dwindled to fewer than 200. Recognising the looming threat of extinction, Indian and Nepalese authorities put strict protections in place and enabled the Greater one-horned rhino to recover to approximately 2,500 animals by 2005. An incredible achievement.

However, in the intervening years, large swathes of habitat were lost to development, fragmenting the range of the species. In Assam, the species’ stronghold, rhinos were found in only three protected areas: Kaziranga National Park, Pobitora Wildlife Sanctuary and Orang National Park. Yet the largest of these, Kaziranga National Park, was almost at capacity. Additionally, with the rhinos concentrated in just three areas, the risk of a disease or a natural disaster decimating the population was high. For the species to thrive, more habitat had to be found.

In 2005, conservationists, alongside the Bodoland Territorial Council and the Government of Assam, came together to develop a long-term strategy to manage the species. Their vision was ambitious; to build a 3,000-strong wild population of Greater one-horned rhinos by 2020, spread across seven sites in the state of Assam. The “Indian Rhino Vision 2020” (IRV2020) was born.

The project was never going to be easy. To achieve the goal, rhinos would have to be translocated out of Kaziranga in difficult seasonal conditions, across fragile roads. Furthermore, security knowledge and resources would need to be improved across the region. Despite these challenges the team has strived to improve the chances of the Greater one-horned rhino thriving across Assam.

Between 2008 and 2012, 18 rhinos were translocated to Manas National Park, six hours west of Kaziranga. Another eight rhinos were introduced to Manas by the Centre for Wildlife Rehabilitation and Conservation. Since then, 20 calves have been born in the Park, including the first second-generation birth in October 2017 – a sure sign that the rhinos are adapting well to their new home!

Unfortunately, there was a significant rise in poaching across Assam, particularly in Manas National Park, in 2012 and 2013. For the rhinos’ safety, future translocations were stopped until the area could be fully secured. With IRV 2020 support, security in and around Manas has been improved, and translocations resumed.

At the end of February 2020, two female rhinos were translocated to Manas National Park, the seventh successful translocation to occur under the IRV 2020 programme. Since 2009, the Greater one-horned rhino population in the Park has more than doubled. Of course, the Coronavirus pandemic has been a huge challenge for the project, causing a number of setbacks, after the final translocations (due in April 2020) had to be postponed.

As IRV 2020 draws to a close, it is clear that the programme has come a long way towards achieving its goal. Today, there are significantly more Greater one-horned rhinos, populating four protected areas across Assam. The initial target of 3,000 rhinos in seven areas may not have been met, but Assam’s rhino population in a much stronger state, more knowledge has been gained, and the team is continuing to reach for the goal of 3,000 animals in the near future.

Thank you so much to everyone that has donated towards Greater one-horned rhino conservation, including our partners Rotterdam Zoo (Diergaarde Blijdorp) and Parc Animalier et Botanique de Branfere, which supported training programmes for law-enforcement staff in Assam.