You are here: Home » News » The Crash Kids Against Poaching 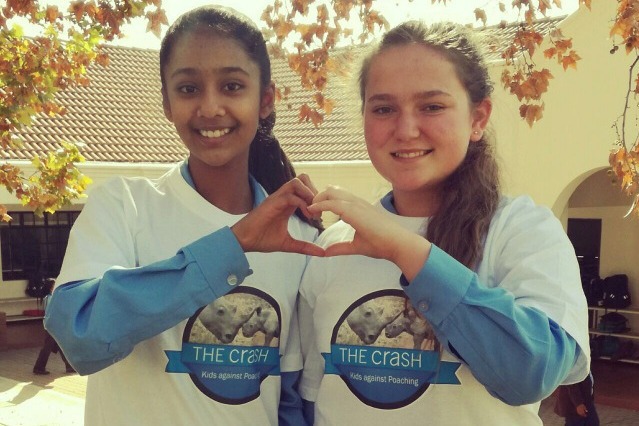 Here at Save the Rhino, we are always particularly delighted to see children and young people working hard to protect rhinos. This week, we’re saying a big thank you to two of our youngest supporters, Azaria and Ashton, from Saint Andrews School for Girls in South Africa.

While they were in Grade 4, Azaria and Ashton’s teacher taught them about rhinos and the threat they face from poaching. They were so moved and inspired that the pair organized a cake and candy sale at their school. That was three years ago and today they are still working just as hard to try and fight for the survival of our beautiful rhinos!

South Africa continues to be hard hit by the poaching crisis. This year, Azaria, who is now in Grade 7, formed a club named ‘The Crash Kids Against Poaching’.  A group of rhinos is called a “crash” of rhinos, so what could be a better name for these budding rhino savers!

The girls have come a long way from selling cakes and candy at their own school. This year they will be visiting schools and raising awareness about the poaching crisis near Hluluwe National Park. This is one of South Africa’s regions most affected by poaching. The group is hoping to make a lasting impact by spreading the world to the local children who can also take the message home to their communities and join the plight to save one of their national icons.

Every month The Crash Kids hold competitions, in which children from all around the world are welcome to take part. There are no membership fees and each child can raise funds for the beneficiary that they choose.  The Crash support a number of equally worthwhile charities that also work hard to save rhinos. Last month they raised a wonderful R350 for Save the Rhino.

We are so grateful for their support and it fills us with a lot of confidence to see such young individuals caring so much about wildlife, ensuring that rhinos are there for future generations to enjoy. If you are interested in supporting The Crash Kids Against Poaching, please get in touch!

On behalf of all of us at Save the Rhino International and South Africa’s rhinos, we’d like to say a big thank you!

2 thoughts on “The Crash Kids Against Poaching”