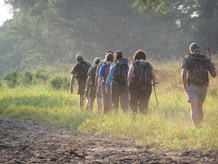 Ok, so we weren’t bushmen, but city dwellers with lots of wide-eyed enthusiasm and shiny new walking poles. After a long flight, we had transferred to Somkhanda Game Reserve the day before (picking up men with guns at the roadside – fortunately they turned out to be our bush guides) and met with Xanthe and Kevin from Wildlands Conservation Trust for our welcomes and trip briefings (and beer and biltong).

The Monday morning, we got up for

breakfast at 6am, spent quite a lot of time working out how to put gators on, got some water and set off! The two guides Dylan and Ivor took the lead with the rest of us following in line behind. We had to stay quiet on the walk and rotate our positions so everyone got a chance to see what was up ahead.

Within 90 minutes of setting off, a beautiful white rhino and ridiculously cute calf appeared in front of us. We looped round in the direction they were heading and saw first a horn appearing out of the bushes, followed by a curious, big footed, big eared baby keen to be first into the open. We watched the pair for a little while before waving goodbye and heading on our way.

The rest of the day (and indeed the trip) we came across all sorts of wildlife – tortoises, impala, zebra, wildebeest, buffalo, elephants, giraffe, praying mantis, monkeys, ostriches, crocodiles, warthogs (Ivor told us the Zulus say they run with their tail straight up in the air because their skin is too tight, so when they narrow their eyes to run through the long grass, their skin stretches and their tail goes up!) and much more.

Each lunchtime, we’d stop for 90 minutes to get out of the midday sun, usually finding a spot under a tree (after checking for leopards) to grab some food and a bit of rest. We’d hunt around in our daypacks

to find the delicious treats provided by Wildlands each day to sustain us – sandwiches, chocolate, nuts, crackers, biltong, fruit and sweets.

The terrain was quite tough at times – with long grass covering rocky ground making progress slow and some of us finding it almost impossible to avoid the thorny branches intent on hitting us in the face. Steep hills in the heat at times caused for frantic fanning of faces at the top.

At the end of the day when we’d walked our feet off and sweated a couple of litres, we’d stumble into camp to be greeted by a sight for sore eyes. A fire would be going with seats set out to rest our weary legs. We’d be handed a cold beer and await our turn in the surprisingly luxurious camp shower (thank you Mike from the 2010 trip for your hint of not putting your headtorch behind you, thus creating a shadow show for the rest of the camp). The camp cook made hearty and tasty dinners stews, spaghetti bolognaise, braais, baked potoates and steak – yum. One night we made stokbroodtjie, which is dough baked over the fire on sticks. It required a certain skill to avoid your dough plopping off into the fire – one which I didn’t possess.

Night time was always interesting. We were assigned a night shift each night – an hour where you had to get up, watch for animals and keep the fire going. A little bit scary for us city-dwellers as it was difficult to distinguish between a fig dropping from a tree and that leopard that was surely about to pounce. One night, Paul was convinced a hyena was in camp, to find on closer inspection that it was Renata having a nightmare and giving off some high-pitched squeals.

Tips for nightwatch: If you have the first shift from 9 until 10pm, cajole others to stay up with you by offering to make them cups of tea. If you do have a horrible shift (say 12pm until 1am), make sure it rains at that point so everyone has a mad scrabble to put up tents, thus making your hour fly by. Make sure you pick a slot before someone who is prone to getting up early – so when you’re on your night shift, they wake up half an hour before they’re supposed to and say “you may as well go back to bed as I’m awake now anyway”.

Day three was particularly special. Dylan from Zululand Rhino Reserve joined us to lead us down the Mkhuzi river. We walked through community land, which was a great chance to see how people live in rural areas and an opportunity for Dylan to tell us about the work he has been doing building relationships with local communities. We stopped off at a school to help plant some trees with some very excited children. We saw the trees planted by the 2010 trip and were amazed at how big they were. Hopefully in two years time, our little saplings will be such giants.

We hopped over the fence into Zululand Rhino Reserve and immediately came across a huge herd of wildebeest who smelt us and legged it. I tried not to take it personally. I held a dung beetle who had spiky legs and gripped on tight as I tried to put it down, and we came across two of the ‘little 5’ – a leopard tortoise and an antlion.

In the afternoon, we were happily walking up a management track to get to the top of a hill, when suddenly a bull elephant appeared on the brow of the hill walking straight towards us! We scarpered into the long grass and went to ground to show we weren’t a threat. He stopped and looked in our direction. There was a split second where we all wondered if he was going to come towards us, but he decided to let us be and carry on his merry way – stopping to snack on a tree as he went. That was quite a thrill.

At the end of day 5, we staggered into Leopard Lodge – a stunning five star resort in Zululand Rhino Reserve. We were welcomed with a wet towel and non-alcoholic cocktail and shown to our luxurious rooms where we could have our first proper shower in a week. Dinner was top-class and we were treated to Zulu dancers and the chance to get everyone around the table one last time.

The next day we had breakfast and said our goodbyes. We transferred to Hluhluwe where we met Dirk Swart, a Section Ranger who Save the Rhino works very closely with. He’d arranged for Lawrence, a Section Ranger in iMfolozi to fly the bantam plane overhead so we could see it in action. Save the Rhino had funded Dirk and Lawrence to get their private pilots licenses, so it was great to see it zipping past. We had a full demonstration of how useful it is when a call came through on Dirk’s walkie-talkie saying a buffalo had broken out of the reserve and was headed for community land. Dirk radioed for Lawrence to fly over to track it down so the ground team could locate it. For the rest of the day, we travelled through the reserve on the back of Dirk’s truck with some of the rangers, where we saw some of the outposts and more items that SRI have funded, such as solar panels and rifle safes. It was a privilege to be taken around the park in the areas not open to the public, and a great chance to see lots more wildlife, including rhinos.

That night we went for a night drive and saw some lions before heading back to Imdindina lodge for some sleep. The next morning ended our journey, with transfers back to the airport and arrangements made for those of us staying in South Africa to start the next part of our adventure.

“It was an experience I will treasure forever. To see wild animals in their natural habitat and actually be amongst them on foot was amazing to see.” Paul

“The trip was an amazing experience and I would recommend seeing the animals on foot to everyone.” Renata