You are here: Home » News » Smart work by Save the Rhino Trust 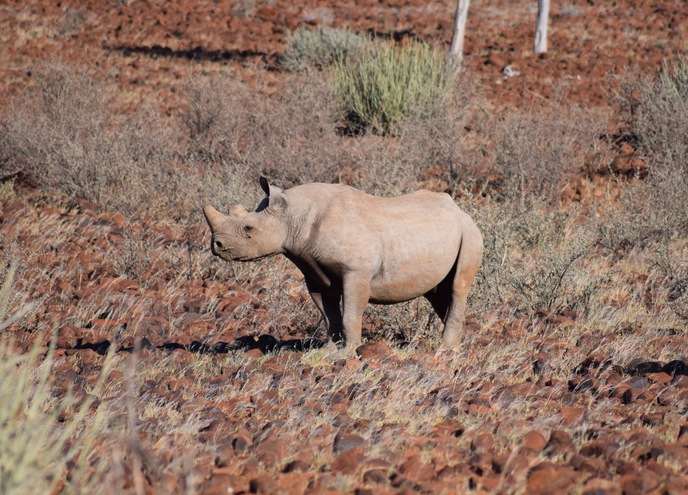 As international poaching syndicates become increasingly sophisticated, conservationists must continue to adapt and employ new strategies in the fight against the illegal wildlife trade. In Namibia, the Spatial Monitoring and Reporting Tool (SMART) is helping Save the Rhino Trust’s rhino monitors collect and analyse rhino behavioural data.

Whilst by no means a silver bullet, technology undoubtedly has a role to play in the conservation of endangered species. From the long-standing use of camera traps, to the introduction of cutting-edge DNA analysis, technology is a tool that should be, and is being, used to assist anti-poaching efforts.

Since its formation in 1982,  Save the  Rhino Trust  (SRT) has continued to develop its highly effective rhino monitoring programme, introducing technology such as GPS and ultra-zoom digital cameras to complement the (essential) boots on the ground. SRT employs local people as rhino rangers trackers to monitor and protect the Critically Endangered desert-adapted black rhino found in northwest Namibia, the world’s last truly wild black rhino population.

During the past five years, the numbers of verified rhino sightings and associated data have increased by nearly 500% in the Kunene Region in northwest Namibia: a fantastic achievement and a credit to the dedicated team. In 2016 there were 3,333 verified rhino sightings! The SRT database is acknowledged as the longest-running dataset on black rhino anywhere in the world. In order to harness the power of this incredible quantity of data, SRT is employing SMART. SMART is a free, simple, and openly available software, designed for those working on the frontline of conservation. It allows SRT to easily store, and then quickly process and analyse, the vast amounts of data that the trackers are capturing in the field.

SRT’s trackers spend 21 days at a time out in the bush monitoring the precious black rhino population, performing daily patrols across difficult terrain alongside Namibian law enforcement officers. When a rhino is spotted, the trackers photograph it, record the GPS coordinates and complete a short form, noting down the name of the rhino (every rhino in the Region is named and trackers are able to recognise individuals by their poor, range and appearance), its age, condition and whether it has a calf. The ability of the trackers to trace, observations, including any illegal activities identified in the area. As this store of knowledge accumulates, it becomes an increasingly reliable source for informing SRT on best practice, conservation and law enforcement decisions, and development activities.

SRT began piloting SMART in 2016, and sees a great future for it. SMART capitalises on the success of SRT’s monitoring programme, complementing the fantastic work of the trackers, rangers and law enforcement officers on the ground, to ensure a future for this special population of black rhino.

One thought on “Smart work by Save the Rhino Trust”