You are here: Home » News » Poaching numbers down in Namibia thanks to dedicated ranger teams 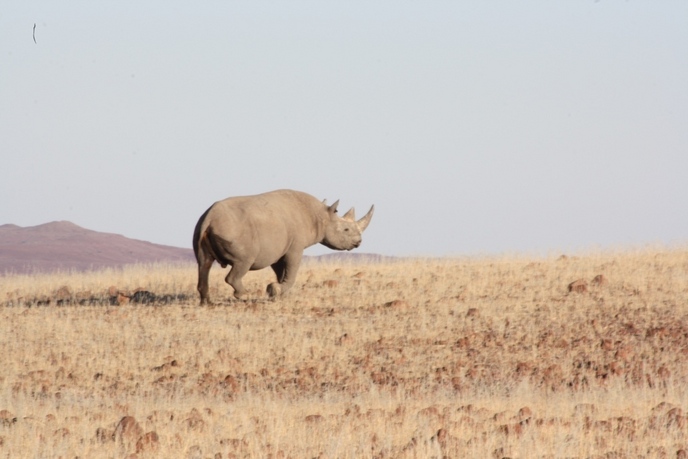 Credit: Save the Rhino International

We’ve been supporting the tireless work of rangers at Save the Rhino Trust, who daily battle the elements and harsh environment to monitor and protect desert-adapted black rhino in the Kunene region of Namibia.

Together with your donations and funds from partners such as the American Association of Zoo Keepers, we’ve been helping to pay for ongoing ranger salaries, new rations and uniforms, and for vehicle maintenance costs – all essential aspects of their daily monitoring and patrolling efforts.

Coinciding with increase in ranger patrols and verified rhino sightings, poaching has continued to decline in the Kunene region and across Namibia: a fantastic achievement and a credit to the dedicated team.

In the early 1980s, prolonged drought and rampant poaching took a heavy toll on the Kunene Region’s desert wildlife, in particular the desert-adapted black rhino subspecies.

In 1982, Save the Rhino Trust was formed to reduce poaching and save the desert-adapted black rhino from the brink of extinction. Their approach was simple but highly effective: offer poachers a more secure livelihood as wildlife guards. After three decades of Save the Rhino Trust’s pioneering efforts and collaboration with the Namibian government and communities, the black rhino population grew steadily in size. The region is now home to the last truly wild population of any rhino species on the planet; the largest to persist outside national parks. The country itself hosts 34% of the world’s remaining black rhino population, and 90% of the south-western subspecies.

Simson Uri-Khob, CEO of Save the Rhino Trust says:

“On behalf of Save the Rhino Trust, I would like to thank our donors who made it possible for us to pull through the dark years. We’ve turned the tide and we’re working to keep it that way, and continue building on our success. I believe we’re on the cusp of a new era for rhino conservation.”

Save the Rhino Trust’s rangers spend 21 days at a time out in the bush monitoring the precious black rhino population, performing daily patrols across difficult terrain alongside Namibian law enforcement officers. When a rhino is spotted, the trackers photograph it, record the GPS coordinates and complete a short form, noting down the name of the rhino (every rhino in the Region is named and trackers are able to recognise individuals by their spoor, range and appearance), its age, condition and whether it has a calf.

To support the heroic work of rangers, American Association of Zoo Keepers donated a fantastic grant of $11,392.31 in July 2017 from their Bowling for Rhinos Programme to aid Save the Rhino Trust’s rangers’ monitoring and anti-poaching efforts. From 1 November 2017 to 31 October 2018, 100% of their funds will directly help to pay for the essential vehicle maintenance and running costs for a Land Cruiser. As rangers cover the 25,000km² area to detect any suspicious activity and deter poachers from targeting rhinos, such practical help towards vehicle maintenance and running costs will go a long way to support rangers’ efforts in protecting Namibia’s rhinos.

Together, we can make a real difference and change is happening. Thank you everyone!